20 Questions with the Avengers continues with Ultron voice James Spader and Vision voice Paul Bettany (who you might know better as the voice of Jarvis). These two men were so great to meet!

Of course, I’m not going to stop at 20 questions… that’s just the quick back and forth format that I prefer to read, so I thought you would like it too. Here are questions 20-22 with James Spader and Paul Bettany. 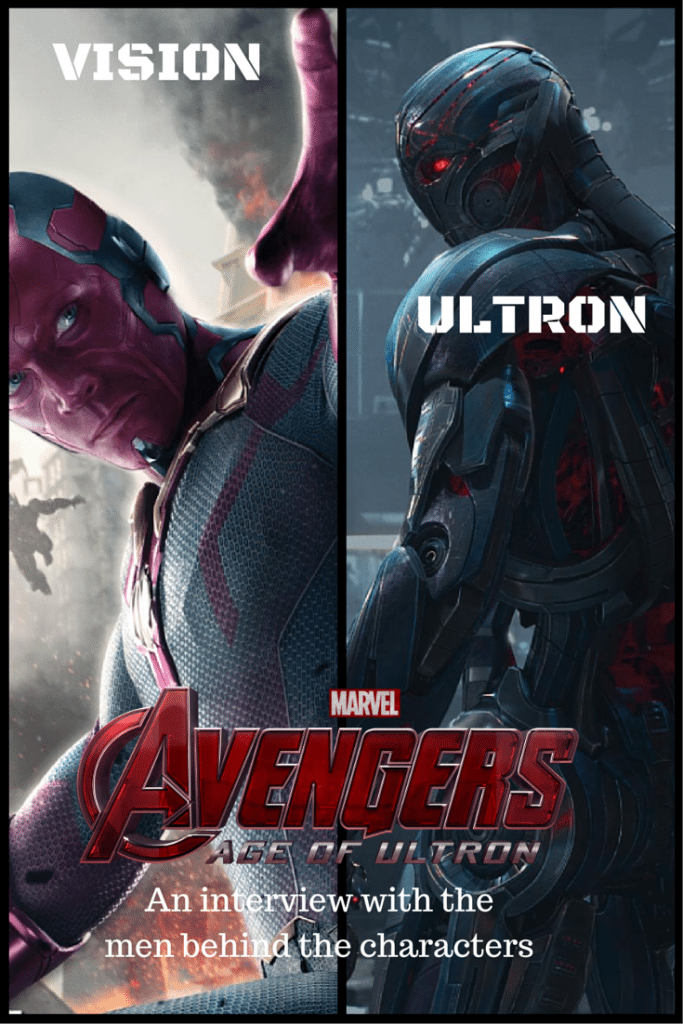 20. Q: Actually, there was no question… James Spader shared with us a fun question that someone in another interview asked:

I’ll tell you a very funny thing. I’m just excited about it because somebody in an interview just before this had asked specifically about this and I hadn’t thought about it until now. But the very first day that I walked onto the studio lot, before I ever hit a set or anything, within a half hour, I walked into a room and they had cameras set up around the room. The room was a big empty room and there were cameras set up around and there was a bunch of people with a whole bunch of laptops all sitting around.

They put me in a fractal suit, which is just a sort of a two piece, [it] looks like you’re gonna go for a run, but has shapes and colors and things and all over it. And then they dotted up my face and they put a big rig on my back and a big headgear rig that had two sort of antenna that come down that are cameras that are right here with headlights right here, so I’m lit right here. And they had me go through a range of motions–fingers, head turns, and all the rest of it. Then, they put it into some program on the computer and fifteen minutes later I could walk in my outfit into the center of the room and turn my head, move my fingers, go like this, and I could look at a monitor and see a sort of formative stage of Ultron doing everything I was doing.

So right from the very first moment I arrived there, I could start getting a sense of what sort of physicality would be appropriate for that eight foot robot. And there was a guy there, quite small, who would’ve been proportionate to my height. I’m five-ten. He was very small. He sort of proportionate height to what, you know, not Chris Hemsworth but maybe an average height Avenger might be in proportion to me if I was eight feet tall. He was wearing a fractal suit, he was a stunt guy, and all the gear as well, and they made him do the range of motion and everything else and within 15 minutes he and I would go move around the room and he was as a different character and so I was able to see right away an eight foot Ultron–me as an eight foot Ultron with another actor who’s a proportionate height to what an average size person would be.

It was really amazing. Uh, so right from the very first moment I was already getting a sense of how to perform for this character.

21. For Paul Bettany: How is it different for you on set? In the other movies where you’re playing Jarvis were you there interacting with the other actors or…?

Paul Bettany: No, I was brought in at the last moment to solve any clarity issues the film had which was my superhero power as Jarvis. What was the difference? The difference was I had to go to the gym. I had to stop eating carbs. I finally got to be on set with a bunch of really lovely, creative, talented people. However, it also means that I have to show up at junkets now, you know? *laughs* The Lord giveth and the Lord taketh away.

James Spader: I did not have to cut back on carbs. Somehow amazingly enough, those animators were able to slim me right down.

22. For James Spader: You have always played the bad guy we love to hate in so many of your films.

Bad guys you love to hate. But with Ultron, is there any part of your humor in Ultron?

Because we definitely see your mannerisms.

Paul Bettany: And his world view, in fact. Global devastation and James’…

James Spader: I’m a great believer in chaos. I think that if the casting works, you’ve been cast because that person intuitively knows, that director intuitively knows what they need, you’re going to be able to provide. And he was specifically looking for that. He was looking for that sense of humor. And he was looking for that irreverence in marriage with the other aspects. And so he took advantage of it and, you know, we would play with things and I’d make a suggestion, he’d [make suggestions], you know. But I really was very faithful to what he was writing because he was really writing it so specifically to me.