If you’re not familiar with the Marvel comic series, there might be some Age of Ultron spoilers in this post.

Who are Scarlet Witch and Quicksilver?

Well, I don’t want to spoil the movie for you, but they are in Avengers: Age of Ultron. By the end of the movie, you’ll love them both!

I pulled together some of my favorite information from our interviews with the Avengers in a “20 question” game format. Here are questions 8-10 with Elizabeth Olsen (Scarlet Witch) & Aaron Taylor-Johnson Quicksilver). 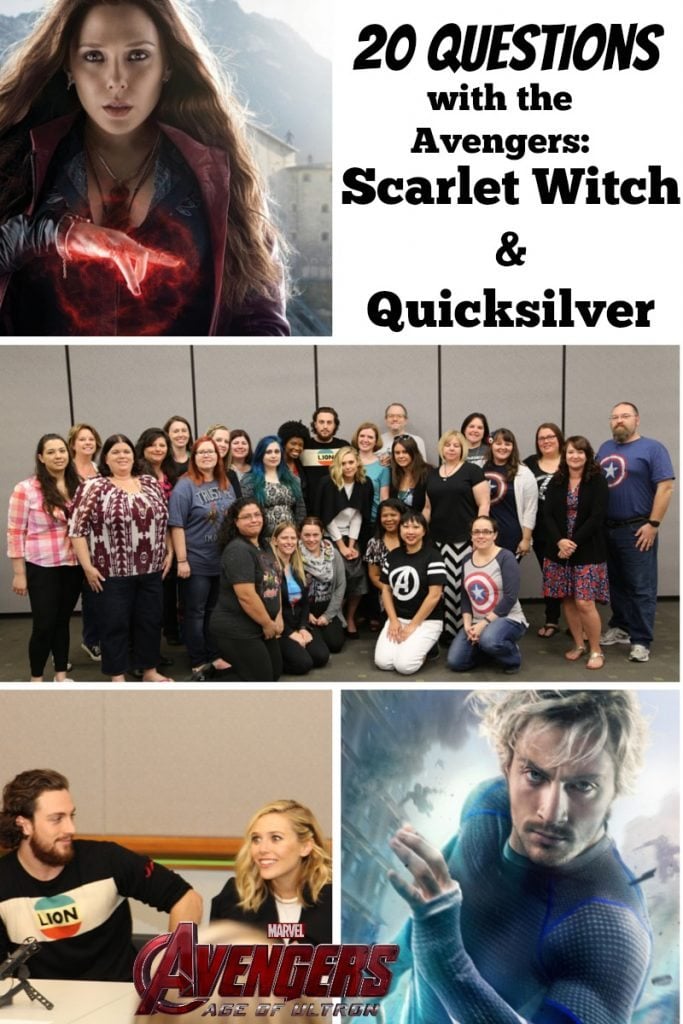 Images courtesy of Louise from MomStart and Disney

8. You did a lot of running. Obviously some of it is special effects, but did you really run a lot during filming?

Aaron Taylor-Johnson: Yeah. That was pretty much what I did all day long. If in doubt, run. All the special effects are sped up. We’d shoot the scene… if Lizzy was in the scene I’d run up to her and we’d shoot that. We did the dialogue, then we’d do a plate afterwards where she’d step out and I’d do the run up and then they would speed that up. But even though you wouldn’t really know because it goes so quick, all the running where there’s a blur… it was me behind it.

9. What was the most emotionally challenging scene for you guys to shoot?

Elizabeth Olsen: The one that was the hardest one for me was when Scarlet Witch can see what’s going to happen–if Ultron has control over the vision. A lot of times my character just had to respond to something that is not existent. Most of the time [things] just popped into her head and no one else felt it but I did. So I have to have some humongous reaction that is coming from nothing and so that always kind of feels stupid until you really just go for it.

10. Since basically all of your powers are special effects, how was it for you to act out those parts where you’re just kind of staring?

Elizabeth Olsen: Well, it’s actually really fun because a lot of people have stunt doubles and my stuff is like a dance, so I can’t have like a stunt double come in and do that. I was always doing everything whereas, you know, I even had to do a triple flip back kick situation but I always got to be in control over my characters body movements which was cool. It was fun because there’s no blueprint to how Scarlet Witch moves, you just see these awesome finger [and] hand gestures.

I worked with a movement coach and she and I watched Joss’s version of Scarlet Witch. That was really enjoyable to watch because he would do the motions and we would interpret it into our own thing, but it was really fun.It was really fun to work with the dancer on something like that and it adds a different element to the fighting, a different visual element to the fighting. And it also felt a little funny because you’re not making contact with anything–like literally zero contact. So, you just trust that you’re going to put a robot where my eyes or something. There’s a lot of trust that goes in when you have special effects that I wasn’t used to and then after seeing the movie I thought “aha, now I’m comfortable.”