There are Age of Ultron spoilers in this post

Did I tell you?! Hawkeye is so much bigger in this movie than in the first! Jeremy Renner’s character Hawkeye is amazing, and has evolved before our eyes. Cobie Smulders’ character Agent Maria Hill is as bad-ass as always.

Here are a few more questions from The Avengers! Our meeting with Agent Maria Hill and Hawkeye was so much fun. They were down to earth, so kind, and hilarious! Here are questions 17-19 with Jeremy Renner & Cobie Smulders. 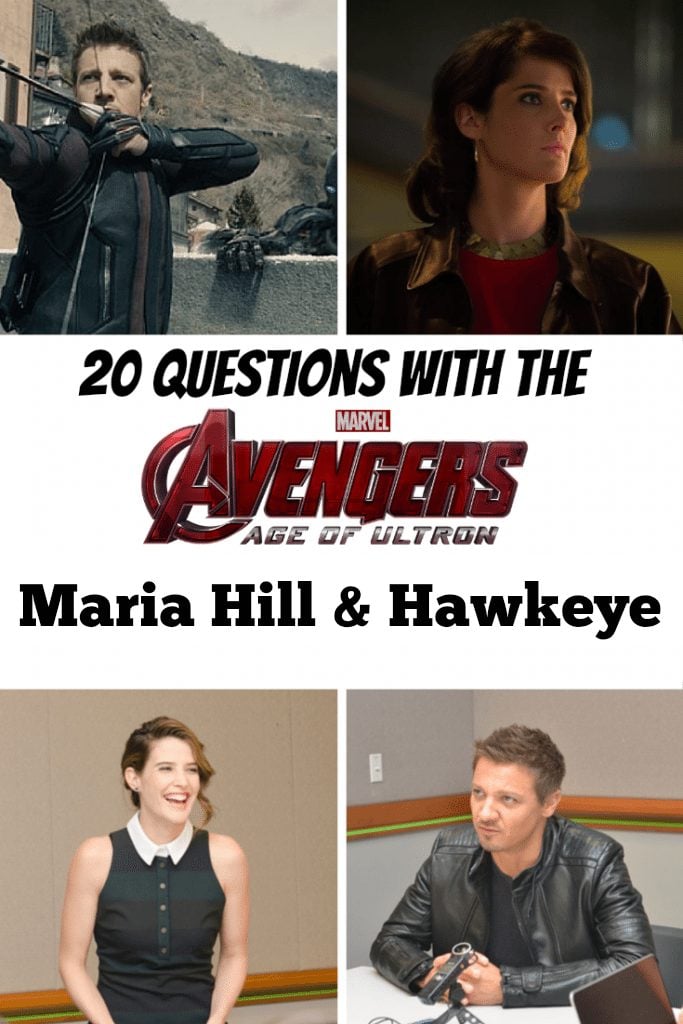 17. Q: For Jeremy Renner: I saw you as a great role model for dads. How do you see that in your character?

Jeremy Renner: As far as like a role model, I don’t know. Those are always hard to talk to. I think you’d have to ask my daughter if I’m a good daddy role model.

But yeah, I think it’s a cool aspect to the character that was brought up. It was brought up actually for the first Avengers, but not nearly as cool because they were gone. And in this one, it’s a fantastic sort of reveal that he’s a daddy. That’s what he fights for because I think it’s a very emotional–for me personally, it’s a very emotional thing. I think in general, audiences can grab on to that. Because it’s something very real.

18. Q: For Cobie Smulders: How was it to be this awesome woman agent [among] all men?

Cobie Smulders: It’s fun. It’s very fun. It’s interesting because people talk about that a lot with these films that there are few females. And it’s a male driven film. But maybe it’s because this is our second one. We all get along so well. I don’t feel that divide on set. All the guys are really great and nice and, um, handsome! Every single one of them, some more than others.

Jeremy Renner: In the dark.

Cobie Smulders: But yeah, it is fun. I mean, we have other strong females, Scarlett and now Lizzie. And and it’s just nice seeing more women coming into these films.

Jeremy Renner: It’s good for us too.

Jeremy Renner: Seriously. I mean, I love Hemsworth. But, um, you know…

19. Q: Jeremy, you had a bigger role in this movie. I have a feeling that as soon as it comes out and all the kids and parents see it that your character’s just going to explode. I can see it being big. How do you feel about that? Are you ready for that?

Jeremy Renner:  I don’t know what that ultimately means. I think the greatest thing that I get out of this whole experience of being in this giant movie and the one prior, is [that] artistically it doesn’t really hit a lot of nerves in my body. But it certainly–like–as soon as a five year old ran up to me, that changed the game. “Oh, wow, I have a five year old [fan].” And that’s amazing. And then here comes his dad in the same costume.

That’s the creepy part. But when the little kids come on up to you, God, it just crushes me. I’ll stop and do anything for a little creature, man. I’m crazy about them. So, I welcome [it], I guess, is the short answer. I welcome that. If it’s the little kids. The grown ass people, stay out of the costume, man. I’ll see you at Comic-Con. That’s okay then.