As a fairly new Marvel fan, I’m still learning about the Marvel Cinematic Universe and all of its constantly moving parts. I loved seeing even more of the story in Avengers: Age of Ultron! 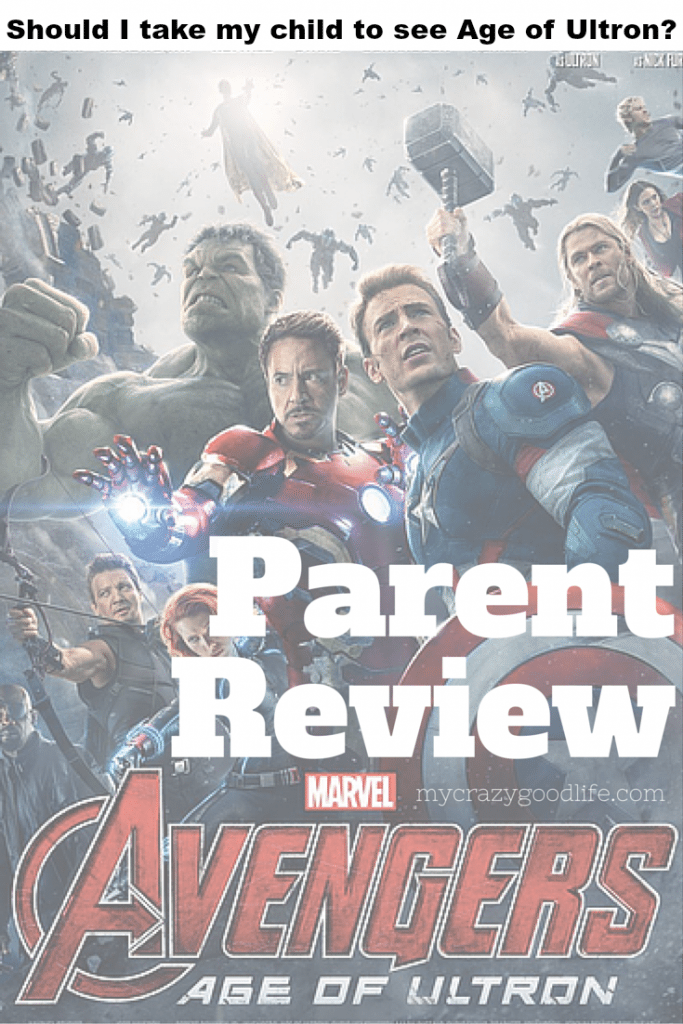 I loved–loved–Avengers: Age of Ultron. I’ve seen it twice and want to share some information about the movie for those of you who are thinking of taking your children.

Marvel Studios presents “Avengers: Age of Ultron,” the epic follow-up to the biggest Super Hero movie of all time. When Tony Stark tries to jumpstart a dormant peacekeeping program, things go awry and Earth’s Mightiest Heroes, including Iron Man, Captain America, Thor, The Incredible Hulk, Black Widow and Hawkeye, are put to the ultimate test as the fate of the planet hangs in the balance. As the villainous Ultron emerges, it is up to The Avengers to stop him from enacting his terrible plans, and soon uneasy alliances and unexpected action pave the way for an epic and unique global adventure.

Avengers: Age of Ultron is an intense action movie that’s rated PG-13 and is 141 minutes in length. The following is a typical action scene from the movie. Though very little blood and no gore is seen in the movie, the action sequences might be intense for younger children.

Jack, my 10 year-old, mentioned that the “creepiest” part of the movie for him was when you first see Ultron. Once Ultron awakes, it’s tough to stop him. Here’s a trailer that shows Ultron in his first moments:

In that clip, you can also see the human-like movements of the smaller robots climbing rocks and attacking the Avengers–that’s another thing that Jack mentioned as a bit unnerving.

Should I take my child to see Avengers: Age of Ultron?

For parents, the Marvel movies are wonderful and frustrating at the same time. Little kids ages 4-10 are usually dying to see the movies, but they are made for those older than 13. I watched Avengers: Age of Ultron with those kids in mind.

As I mentioned before, the intense action could be a bit much for kids ages 4-10. My 10 year-old was ok watching the action scenes, and was really only bothered by the first appearance of Ultron and his soldiers.

The information below this sentence contains spoilers that will help you determine if you are comfortable with your child seeing Avengers: Age of Ultron.

If you’re thinking about taking your kids, here’s what you need to know:

Will I let my kids see Avengers: Age of Ultron?

Jack (10) and I saw this movie and we both loved it. I mentioned above the scenes that he mentioned were a bit creepy, but he wasn’t bothered otherwise. He liked that there wasn’t a lot of blood and that the fight scenes were fun and full of action rather than gory and violent.

Michael is 14 and I’d have no problem letting him see this movie!

I attended press events with Disney and ABC TV, which included a screening of Avengers: Age of Ultron. I was provided with an expenses paid trip to Los Angeles in exchange for my coverage about the events. No other compensation is given.