While in Los Angeles, I was part of a group of bloggers who was able to tour the set of Agents of S.H.I.E.L.D., meet and interview the cast of the show, tour the costume design area, and even watch while some of the season finale was taped! It was a pretty amazing experience! 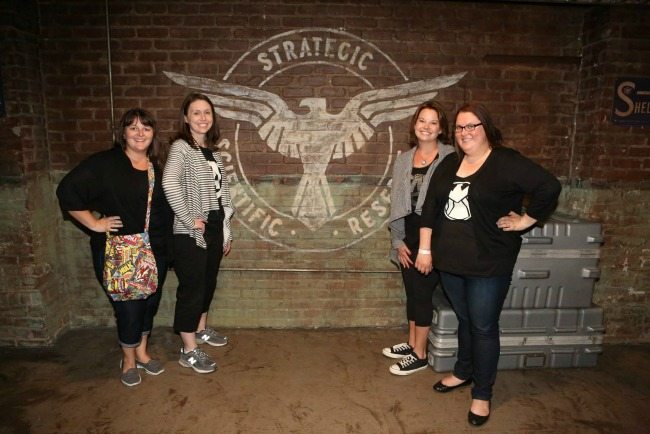 Ann Foley is the set costume designer for Agents of S.H.I.E.L.D. Her day to day job requires an amazing amount of talent and sounds like the perfect job! Here are a few Q&A from our time with her. 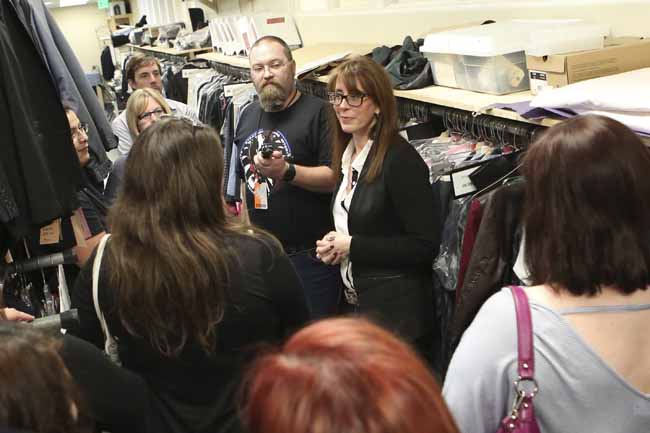 Q: Can you explain what a closet is?

Ann Foley: A closet, [or ]  the working closet, is where I pull their clothes for each episode. I have a little closet that I use for all my fittings, for each and every episode. In my vision boards are ideas that I had at the beginning of last season that I used to show the producers and even the cast where we were going with each one of them so that we could create six really strong identifiable characters.

Q: How much lead time do you get? Actors may not know what’s coming up until the episode before, but is costume different?

Ann Foley: [For] Mockingbird, I got about two months. Same with Deathlok. Ming in the silver dress,cabout 10 days. 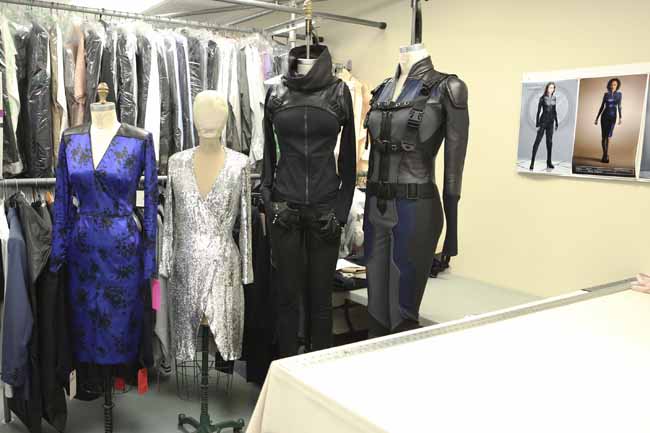 Q: What considerations do you have to take for stunt doubles, fighters, etc.?

Q: What kind of system do you have when you need to find a few pieces for each character?

Ann Foley: Well, I have some fabulous shoppers on the show, and also I am a big online shopper. I’m going to give a big shout out to Shopbop and Net-A-Porter.

Q: Talk about the job of shopper.

Ann Foley: To shop all day long. It’s great because we know the characters now, and I think the bigger challenge at the end of last season and starting this season when we started going darker and edgier, was trying to find that idea of all of the characters. For example Elizabeth Simmons, to me, is probably one of the more challenging characters to shop for on the show because she is eclectic.

So it will be one piece from this store, one piece from that store, and it’s just about styling her and bringing her together without any of them going over the top. The challenge for me, I guess, going back to your original question is keeping it believable, keeping it real, and not having it be over the top. And, you know, people [not] getting distracted by what the cast is wearing.

Our super secret set tour required us to be completely offline–no pictures, no tweets or other social media updates, and no phone calls. 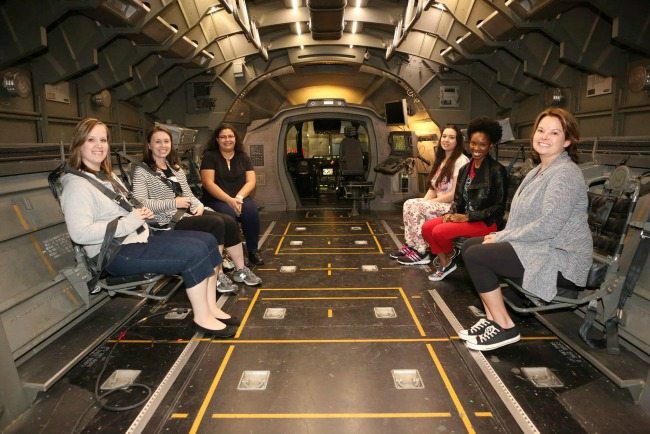 We ended up spending hours on the set of the show, and experienced the “hurry up and wait” I’d only been privy to in the military. Do you know how hard it is for bloggers to stay off their smartphones during downtime? We hurried to the set, then waited for the team to begin filming. Then we hurried to the viewing area and waited for the team to begin filming. We hurried to grab snacks, then waited again… you guessed it… for the filming :)

The awesome part of this? We were able to take in a real living television set. We saw Skye (actress Chloe Bennet) preparing for her scene by jumping in place and getting her heart rate up. We were able to see her getting her makeup on (even “bruises” that she received in the previous scene), and she chatted with us for a minute. She was so, so sweet. 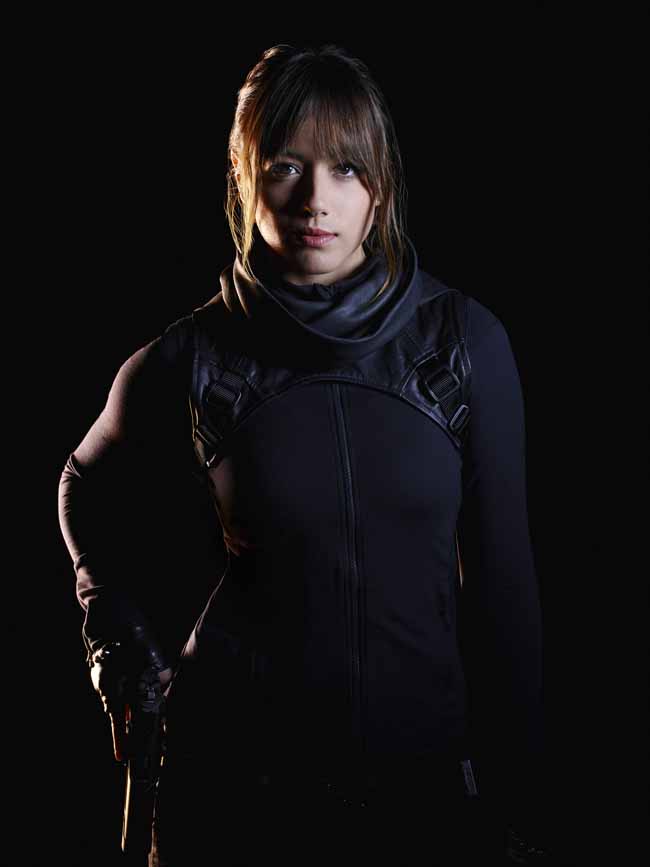 We had quite a surprise when we saw one of the scenes being filmed for the season finale!! No spoilers here… you have to see it for yourself!

Skye is torn between her loyalty to S.H.I.E.L.D. and her connection to the Inhumans as tensions rise between the groups — and Coulson reveals a secret he’s been hiding from even those closest to him, on “Marvel’s Agents of S.H.I.E.L.D.,” TUESDAY, MAY 5 (9:00-10:01 p.m., ET) on the ABC Television Network. 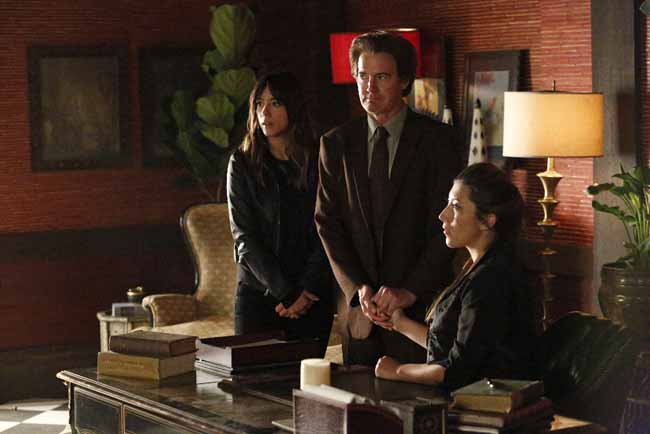 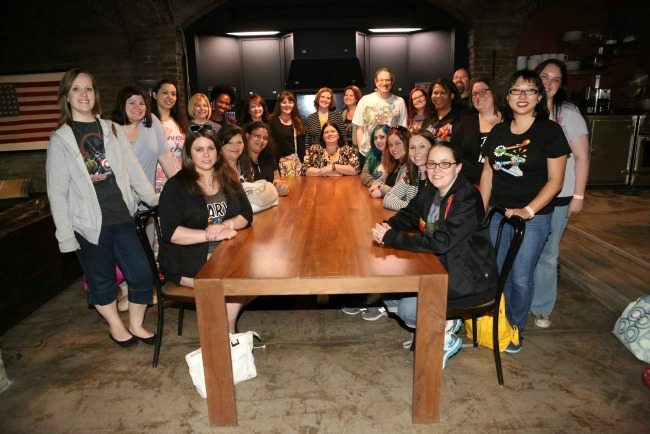 ”Scars” was written by Rafe Judkins & Lauren LeFranc and directed by Bobby Roth.