Continuing on with our 20 Questions with the Avengers series, Age of Ultron Director Joss Whedon is up today!

You can catch up on my 20 Questions with the Avengers series right here: 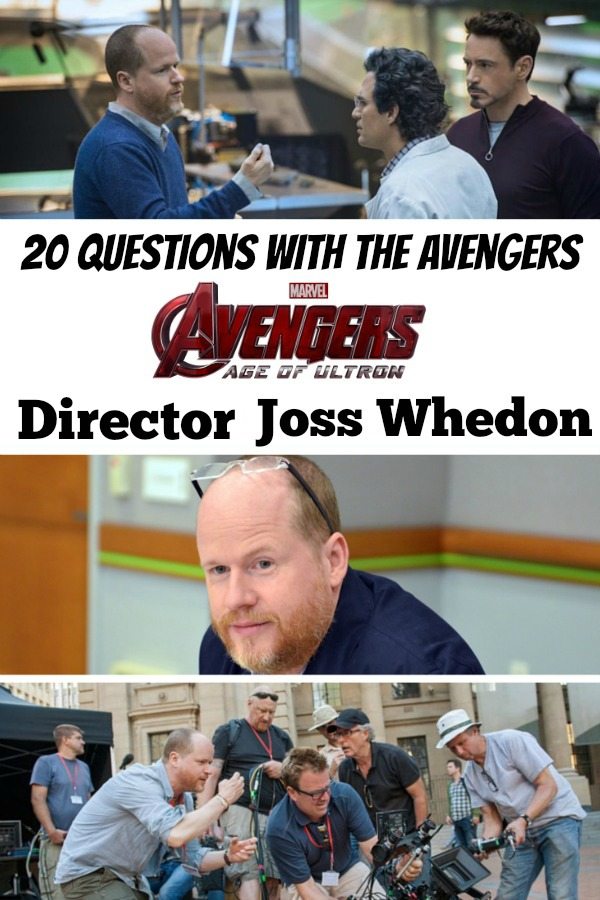 11. You have that iconic shot of the Avengers jumping in slow motion which, I think all the fan boys and girls have like gone wild over. Can you talk about how that came to be? Whose idea it was?

Joss Whedon: We just caught it by accident, you know. I hadn’t even said action yet. They were just clowning around… That shot was the last shot we got finished, because it’s over a minute long. I wanted to create some frames that were just unabashedly comic book frames.

But wait. That shot is missing something, don’t you think?

Ok, that’s better. Now all of the Avengers are there.

This is a fun photo that was staged by Disney during the Age of Ultron press day. Though it looks fairly easy to shoot, it was a fun but difficult series of balancing on one leg and almost falling about 7 times!

Back to your regularly scheduled Joss Whedon Q&A.

12. We hear Ultron say, “Upon this rock, I shall build my church” and we also hear the Vision say, “I am.” Was there any type of significance to having these forms of artificial intelligence speak those Biblical terms?

Joss Whedon:  Yes. It’s not necessarily specific in the sense of we are saying this about, Ultron… We are talking about new life and we are talking about the Vision in particular is something, sort of more than man and that iconography is deliberate but it’s open to interpretation. I’m not saying that they are one thing or another. I’m saying that our response to them contains some element of that understanding of ourselves and our history.

13. Did you plan something at the beginning of production that you didn’t get to do in the movie?

I’m very happy. It’s, in fact, a minute shorter than the first one which is a point of personal pride because as much as I wanted this to be bigger, I didn’t want us to seem like we were full of ourselves. “Oh, you love us. Here’s three hours. You’d like to pee? Tough.”