This post, Thor: Ragnarok Cast Interview, is part of an expenses paid trip with Marvel Studios, Disney/Pixar, and Disney Junior. Some interview questions and responses have been edited to improve readability.

As part of our Thor: Raganrok event we were able to attend the official cast press conference in Los Angeles. It was great to see the case interact with one another–we can tell that they grew close during their time filming the movie. 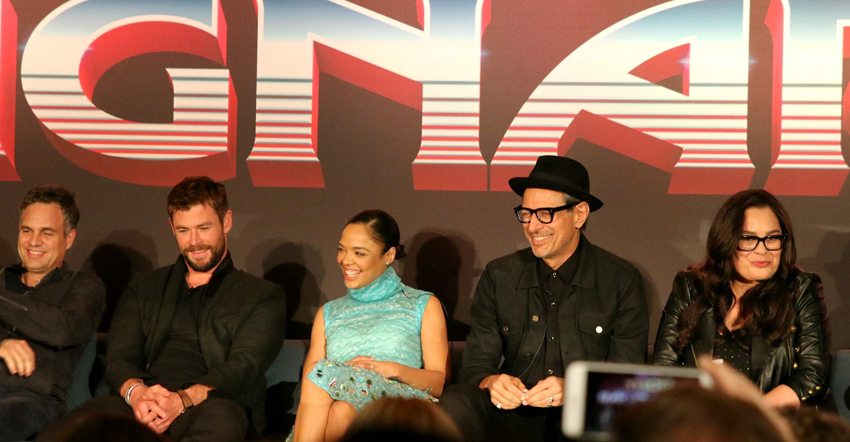 Here are some of my favorite parts of the press conference, I hope you love learning about the cast as much as I do!

HOST: Chris, what makes this Thor different from the others?

Taika Waititi, basically. I think we all had a vision and an idea, and a want to do something vastly different than what we’d done before, and take it to a different place.

That meant kind of doing away with what we knew, and just reinventing it. It all came from his crazy, wonderful brain, and his inspiration, and him pushing us every day on set, and constantly encouraging us to improvise, and explore, and take risks.

It was one of the most enjoyable experiences I’ve ever had on a set, and a film that I feel the most proud of, just because of this – this whole team, and the collaboration, and the fun we had.

HOST: Taika, you kind of brought an independent sensibility to this monstrous film, and gave it fun, and a little heart, too. What was the process like for you?

I came in, and I guess I thought that – I knew my strengths were tone, character, and relationships. I had to ignore the scale of this monster, this beast, you know. It’s a huge, huge film.

And what can be distracting on set is if you look over your shoulder, and you see 300 people standing there. I just had to keep reminding myself what’s more important is what’s inside the rectangle, and usually, it’s two or three people trying to remember their lines.

And so it doesn’t matter the scale of the film – that’s always the same, you know. I just focused down on what I was used to, which was what’s in front of the camera. 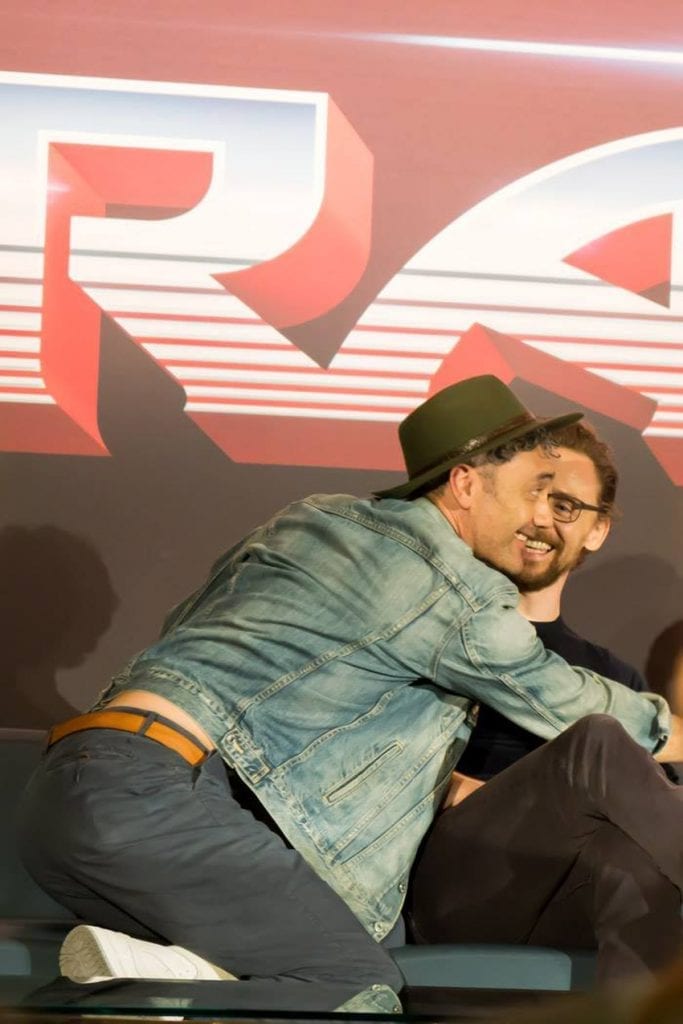 PRESS: Mark, are you interested in all in doing a full Hulk movie? This is the first time we’ve seen the Hulk this much. And if so, what aspect of the character would you be most interested in exploring?

I would love to do a Hulk movie, and I think we all would love to do one. But about a year ago, before I even had this part, or were talking about doing this, Kevin had asked me to come over and have a script meeting. Basically he sat me down and he said, ‘What would you like to do if you had a stand-alone Hulk movie?’

No, I didn’t feel any pressure with that specifically. You know, the things that I thought about the particulars of Valkyrie had more to do with, like mass and size.

For example, I thought, like ‘Oh, I’m short,’ or ‘I’m not buff enough.’ Or how she’s arguably as strong as Thor. How do I stand next to a person like Chris Hemsworth and feel like that’s true? 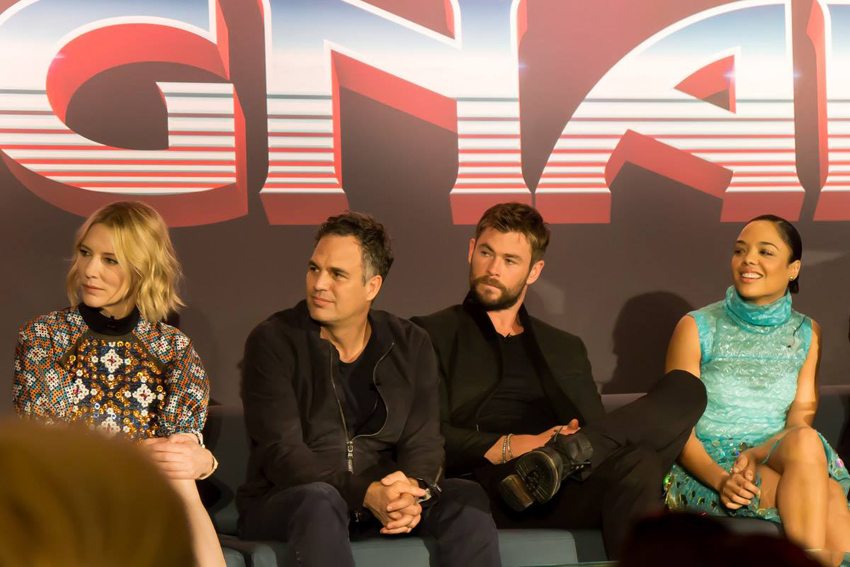 PRESS: Jeff, you’ve been in so many iconic films–what was it like to come into the Marvel universe?

I like the character, of course, and the opportunities in the character. Joining a group like this, a cast like this is a dream come true.

Taika–working with Taika, that was my first, connection point to the movie. We had a meeting and hit it off, and he said what we were gonna do, and improvise, and have fun.

But then, you know, Kevin Feige and Louis D’Espesito, and Victoria Alonso, and Brad Winderbaum–the whole upper tier of creative leaders, do something unique. They know how to make these epic productions, and popular movies, but they want to make good movies.

And they somehow uniquely know how to do them, that feels to me like an actorly, workshop-y, character-y, improvisatory, delightful experience–and make a movie that I think skins the cat like this is just – I’m grateful, overwhelmingly grateful.

PRESS: My question is for Kevin or anybody that would like to answer. Is there any Easter eggs that we can look forward to in the trash piles that we see, both when Thor, and then when Jeff Goldblum’s character lands at the end of the movie, as well?

Kevin: There might be some things in the trash piles. I mean, the biggest Easter eggs are on the side of the Saharan palace– right, Taika? There are previous Grandmaster champions that we see, as one for Hulk is being constructed, and those are all sort of Easter eggs for the deeper comic universe–that may or may not ever show up in the cinematic universe, but we thought it’d be fun to celebrate.

Taika: Yeah. And in the trash pile, there is one Easter egg, an actual egg. 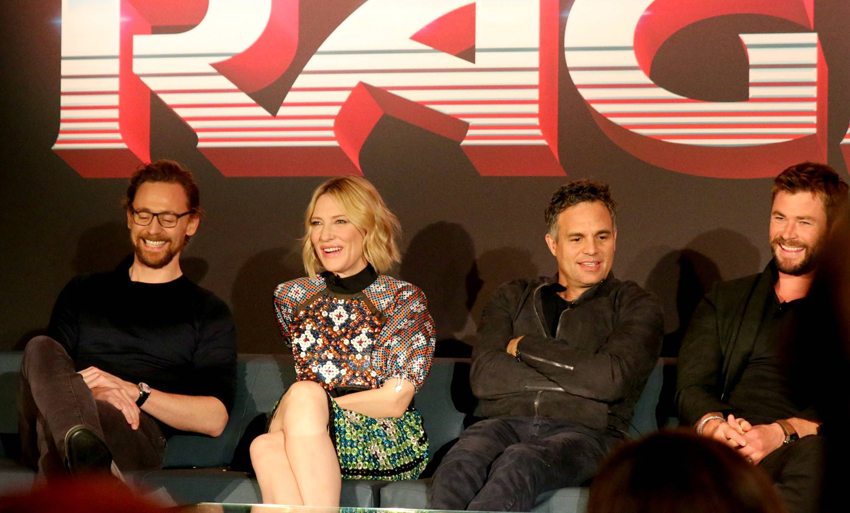 HOST: I want to ask Karl real quick about coming into this universe, and also – did you feel like – Cate talked about working out 20 minutes a day. Did you go ahead, and were you working out, and getting ready to stand up to that guys right there (Chris)?

The working out schedule was rather intense. In fact, Taika came to me and he said, ‘Listen, you need to tone it down. You can’t be bigger than Chris, okay?’

I just had the most amazing time working on this film. And building upon what Jeff said, I feel very blessed to be a part of this family, and to have had the opportunity to work with Taika, and for him to be so well supported by the team at Marvel, and for them to have the courage and the bravery to allow him to just do his thing.

It was a real rarity. I really appreciated the environment that Taika created on the set. It was fun; it was focused. He would often play music. And there was nothing sacrilegious about a take. You know, he–quite often, you’d be in the middle of a take and he’d go, ‘Oh, try this, or try that.’ And it was just wonderful too–it felt like everybody had your back, and we had fun.