Yes, Sign Me Up!
Home » Health & Fitness » What Are Artificial Sweeteners?
177 shares

Artificial sweeteners are created by a variety of means starting with both natural and chemically created substances. I hope to help you make an informed decision on these sweeteners by giving you a bit of information on each of the most popular options!

What Are Artificial Sweeteners?

Artificial sweeteners are a hot button topic when it comes to a healthy lifestyle. There are those who believe they are great for lowering calories and weight, while others believe they’re unhealthy and should be avoided at all costs.

No matter which side you are on we can all agree that knowledge is power, and I am a firm believer in knowing why you’re doing something and not just following the rules of any program blindly, so here is a little bit of info about the most popular artificial sweeteners.

Are Artificial Sweeteners Approved for the 21 Day Fix?

Artificial sweeteners are not approved on the 21 Day Fix. In general, it’s good to stay away from them but in the end it’s a decision that we all make for ourselves. While all of these options I’m discussing today are going to have less or no calories when compared to sugar, that’s not always a good enough reason to make the switch.

The reason that artificial sweeteners are not approved for the 21 Day Fix is because the focus is on whole foods and making healthy choices. Artificial sweeteners can trick your body into craving sweets and potentially limit your success in losing body fat, they’re not natural.

Here are some of the most popular artificial sweeteners on the market today:

Truvia is an artificial sweetener developed by Cargill and Coca Cola. There’s not actually stevia in Truvia. Though the name sounds similar and it is marketed as a “stevia based” sweetener there’s actually only small amounts of rebaudioside A, which is one of the sweet compounds found in the stevia leaf. This is an example of a company saying they are Stevia based when in fact there is a tiny amount of stevia and a larger amount of the artificial sweetener that they don’t promote.

Erythritol is the main sweetener in Truvia. It’s a sugar alcohol sweetener, similar to Xylitol, which we’ll talk about below.

Erythritol is one of the better artificial sweeteners, if you can call it that–because it does not present some of the other health consequences that you see with other sugar alcohol substitutes. The somewhat bad news is that it doesn’t present health consequences because your body can’t break down the substance at all. It passes through your body totally unchanged.

It’s still on my list of things that I, personally, won’t consume.

Next up on our list of our artificial sweeteners is Sucralose. Sucralose is actually derived from sugar but it’s not a natural substance. The difference is in how it is digested by our bodies. Sugar can be digested and put to work or stored in the body but Sucralose can not. Thus we know why there are calories in sugar and not in Sucralose!

While it might seem like a good idea to use Sucralose to lower your sugar intake for people with diabetes it can be a difficult solution. Sucralose has been shown to cause insulin sensitivity while raising blood glucose levels. For most people the side effects of Sucralose are low but it’s something to consider if you have a condition that requires insulin.

This low calorie sugar substitute is a combination of two amino acids. While that might seem like a natural thing that your body is used to processing, aspartame is not a natural substance–please keep this in mind when you are considering products that have artificial sweeteners. Many diet sodas contain aspartame and to be honest, there’s a reason you usually end up craving more once you’ve had one.

Aspartame is one of the most controversial artificial sweeteners on the market. You don’t have to search much to find articles about the adverse side effects you could experience. 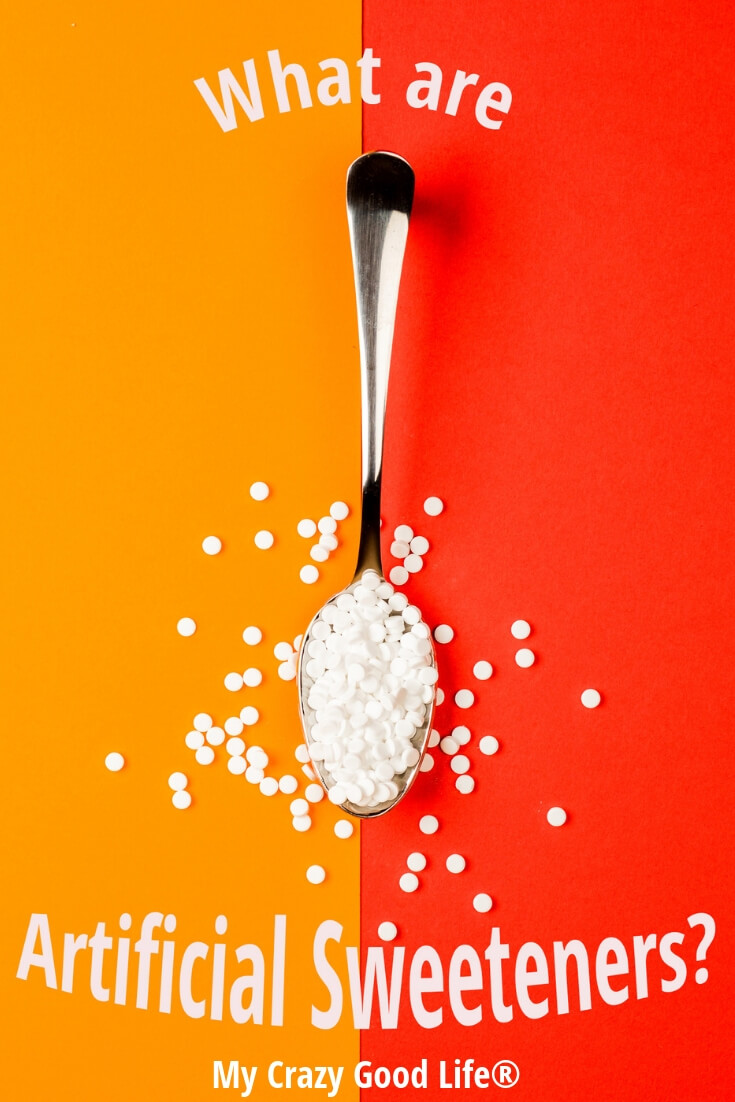 Saccharin contains no calories. It’s 300 times sweeter than sucrose! It has been in use for over 100 years, and like some other artificial sweeteners saccharin leaves your system unchanged because it is not able to be broken down by the human body.

Many “diet” and “sugar free” foods are sweetened with saccharin (which is why you’ll hear me saying to avoid anything that claims to be diet, fat free, sugar free, etc). Because saccharin has a bitter aftertaste it is often mixed with aspartame and other artificial sweeteners. There is some evidence that saccharin has helped to aid in weight loss because it can be used to replace calorie-full sweeteners. In the same sense, like other artificial sweeteners, it can make you hold onto weight because it encourages users to eat unhealthy foods that are just lower in calories.

Fun Fact: you might not know that saccharin is also found in products like toothpaste and mouthwash.

Xylitol is technically a natural no calorie sweetener. It’s derived through a series of processes from sugar alcohol that comes from fermented corn.

It’s low calorie and comes from natural substances, but there is some evidence that in terms of sugar alcohol sweeteners, erythritol is a better option. Xylitol can cause a laxative effect so if you are sensitive to gastrointestinal upset you might want to avoid this particular artificial sweetener.

Xylitol has many uses other than just low calorie sweetener aspects. It’s especially beneficial for keeping skin moist, and many oral health professionals have seen great improvements for patients with dry mouth.

It can be hard to find unbiased information about artificial sweeteners on the internet. Make sure when you do your research you take into consideration the source, date, and reason for publication.

What can I use Instead of Artificial Sweeteners?

Natural sweeteners such as 100% Stevia (my favorite brand is Sweet Leaf), maple syrup, agave, honey, coconut palm sugar, and molasses are great substitutes for artificial sweetener. Use them sparingly, though–I shoot for no more than 4 teaspoons a day in my food and drink.

More than anything, you should pay attention to your body and how it reacts to anything you are eating or drinking! You make the final decision, but please be sure to stay informed!