In this time of new technology, technology that we didn’t have as kids, it’s important to be flexible. I have no previous experience with teenagers, kids who use iPhones, or even kids who use Snapchat. I’m literally making it up as I go along, as I bet you are.

Making it up as you go along means backtracking and changing your mind as the world around you changes. And when you have kids, the world around you is changing daily. Something we have always said to Michael is, “we’ve never been the parent of a ___ year old before. We’re learning as we go, and there will always be changes.” We’ve grounded him and then decided against it after we have thought it through. We have sat on a few things for days before deciding that we need to address it with him. These are things that happen when parents don’t have a precedent set. I can’t ask my Mom how she handled my iPhone use. This is a first for us all.

While I still stand by my opinions that Snapchat should be monitored (as much as you can monitor it) and that it could be dangerous for teens, I’m also changing my stance a little and allowing Michael to have it on his phone. 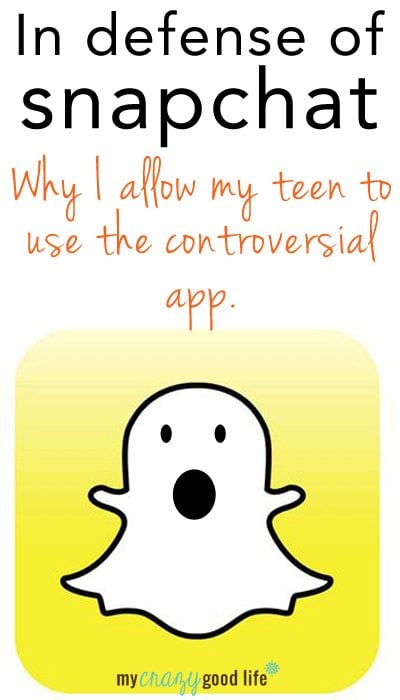 While I’m not happy about Snapchat being on my son’s iPhone, I’m allowing it. Here are my reasons why:

1. Michael isn’t very outgoing. Last year at one of his parent-teacher conferences, we were told that he was chatting too much during class. My husband and I immediately had smiles on our faces and responded with, “we’ll talk to him about being respectful in class, but we’re kind of excited that he’s talking to friends during class.” You see, kids do that–and we were afraid that Michael was keeping to himself a little too much. He’s using Snapchat as a way to talk with his friends, and as a parent we don’t want to get in the way of him making friends. This is the same reason that we will take video games off of his phone as a punishment, but we won’t take his phone away from him. We want him to interact with his peers.

2. Kids delete messages. As much as we would like to think that they listen to us when they’re told to not delete anything, they still do it. Texts, photos, Facebook messages, and Instagram messages–they’re all being deleted by kids every day whether you’d like to believe it or not. Is deleting messages and texts really any different than using Snapchat, which deletes all messages after about 10 seconds? In my eyes, it’s not. Trust me–I don’t like saying that, but it’s true.

3. While there are several reasons to delete apps from a child’s phone, in this situation I believe it’s best to teach my son how to use Snapchat responsibly. We will still do random checks of his phone while he has it in his hands and when he puts it up for the night (our rule is that the phone needs to be charged in the kitchen every night). I’ll watch Snapchats that haven’t been seen yet and if I see anything inappropriate, we’ll chat about it. And we make sure to remind him regularly that though Snapchat says the photos are deleted forever, they actually aren’t. You could take a screenshot of a Snapchat or photograph the Snapchat with another device. Some companies are offering Snapchat retrieval services and of course, a court order will open those Snapchat records pretty quickly.

What is your opinion? Do you allow your teen to use Snapchat?