Yes, Sign Me Up!
Home » Blog Tutorials » What I Wish I Knew Before That Post Went Viral
42 shares

Looking for more blogging tips? Everything But the Posts, my new book, gives tips about setting up a blog, connecting with your community, and monetizing. It’s available in paperback, on Kindle, Nook, and iBooks.

A little over a month ago, one of my blog posts went viral.

It was my post Apple iOS7 Tips & Tricks, published 6 days before the operating system was released to the public. It was based on my experiences as a beta tester.

My previous definition of a viral post was “any post that receives five times your average views in a week.” Because we all have those posts that catch some steam and spread like wildfire, and that’s awesome.

But this was different.

It brought me the highest day of traffic for My Crazy Good Life, at 160,384 pageviews.

It crashed my blog and put me in hot water with my host.

It cost me a lot of money, and made me miss quite a few deadlines.

And that post spread to other posts within my blog, thanks to interlinks. In just over one month, my little blog had received over one million pageviews.

Boy, have I learned a lot in the past six weeks. And I’m sharing. 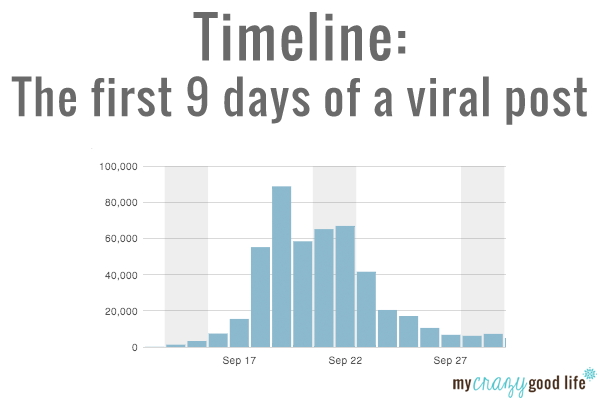 Here’s the timeline of the first 9 days the post was published:

Day 1. Published iOS 7 Tips & Tricks on a Friday afternoon after Karen noticed that my guest post on her blog (iPhone 101 Tips & Tricks) was getting a lot of traffic. I pinned it a few times and shared once on Twitter and Facebook.

Day 3. Noticing my previous “record high day” of 2,200 pageviews being blown out of the water, I called my host. I’d heard too many bloggers talk about how they got so much traffic that their host shut them down. That wasn’t going to happen to this girl.

Me: So, I have this post that’s going viral. What do I have to do to my account to make sure it won’t be shut down?

Host Gator: Nothing! You’re good – you have unlimited bandwidth, so congrats and enjoy this!

Me: Well, I’m thinking it’s not that easy. You see, I’m at 2,500 views today and we still have three days until the operating system hits, so I’m thinking this is going to be pretty big. Like, tens of thousands of views probably on Wednesday.

Me: You’re sure? I’m only paying $15/month for hosting. That doesn’t sound very unlimited to me.

Day 4. I sat, waiting and watching. And watching. I put an ad on the post and signed up for a Google dfp account. I also asked a few of my facebook boost groups to share the post for me, making sure I was getting the maximum amount of eyes on it.

Day 5. The day before the release date of iOS7, and I noticed my blog was a little slow. As I was heading to bed at 10pm I checked my email and there it was: a warning from Host Gator.

I had exceeded my bandwidth and unless I found a way to fix it, they were shutting me down. Their email chain said a few things: disable SEO by Yoast, as it causes excessive loading; enable a super cache; move the post receiving all the traffic to its own static page; disable the search feature on my blog.

I did the things I could, and received another warning about 15 minutes later.

I called them. This was exactly what I didn’t want to happen.

I was put in touch with the rudest customer service rep I’d ever spoken with. I had loved Host Gator up until this point.

I explained that I tried to avoid this by calling Sunday, why wasn’t this mentioned? I had unlimited bandwidth, right?!

Me: Oh, I must have misunderstood that from our conversation Sunday. Maybe I didn’t ask for enough clarification? 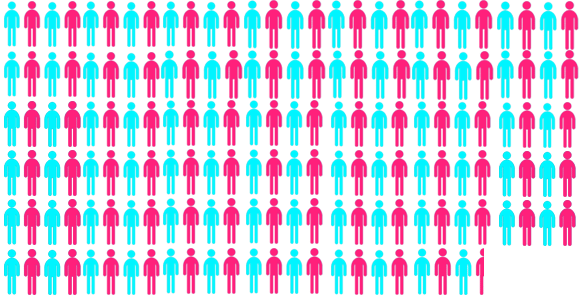 Day 6. The way this works is, you receive a warning that your host has blocked your account. You can choose to lift that block 5 times before it’s permanent.

At this point, Host Gator claimed they could do nothing for me. They couldn’t give me more bandwidth, they couldn’t congratulate me on the traffic and turn their heads to let my blog ride this out, even though my bandwidth usage before this post didn’t ever come close to what I actually paid for.

They couldn’t transfer me to a dedicated server without taking my blog down for 3-5 days.

Today was the release of the new Apple operating system.

My pageviews had been doubling every day since the article posted.

And I was going to be shut down.

I emailed the person who takes care of my technical blog stuff. She listened to me swear. She swore with me. She shook her head when she heard what happened and she told me how to fix it.

I had to change hosting companies.

A Small Orange was recommended to me, and after emailing back and forth a bit (they’re quick and responsive) we had a plan. 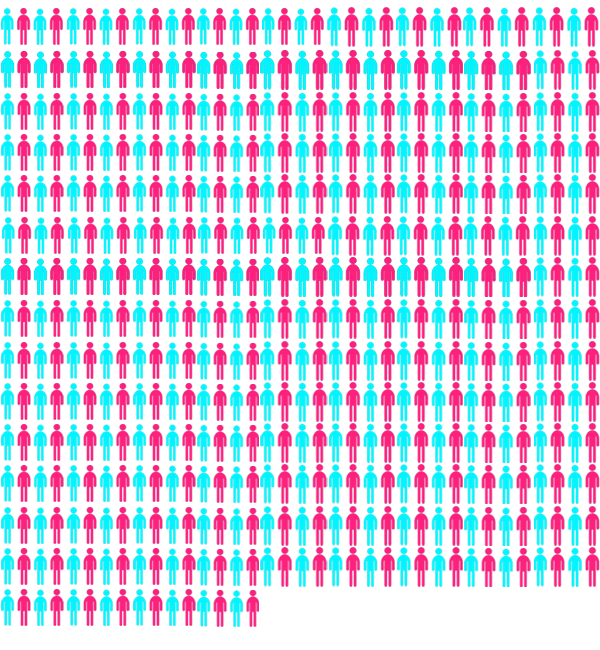 Day 7. After a few heated phone calls, Host Gator logged into my WordPress blog, changed the password on me, and kicked me out.

They installed a cache plugin of their choosing, but didn’t activate it.

In addition, they disabled the cache plugin that had previously been activated.

Essentially, they broke their own rules (they said I had to have a cache plugin) and caused my CPU usage to skyrocket, which shut my blog down.

I was the girl. I was the blogger who was on the phone crying to a total stranger and attempting to keep her cool.

That night, my blog helper switched my accounts to a cloud server with A Small Orange. She worked in the middle of the night to avoid the peak traffic hours.

After a series of long outages all day long, Host Gator shut me down at 7pm, which was the start of my peak traffic time, 7pm-11pm.

Day 8. I woke up with A Small Orange. They were helpful and quick to respond to all of my questions. I knew more about caching and bandwidth and CPU usage than I ever needed to know at this point.

After noticing my views were slowing down a bit, the Ninjas at A Small Orange (that’s what they call themselves, it’s in their email signatures) helped me install a cache program into my server and showed me where to keep an eye on my views.

I just went from paying $15/month for hosting to $100/month. I also hired my someone to switch my three sites to A Small Orange and set up my ad network accounts.

Day 9. I had no idea that a viral post could bring you traffic for such a long time. I guess in my head it was a 1-2 day thing. I was 9 days after the post and still seeing tens of thousands of views. The traffic was pouring in from Pinterest at this point.

Here’s what I learned:
Things you have control over:

Things you have no control over:

What I wish I knew then:

I wish I had listened to the quiet whispers in the blogging community and moved to a blogger-friendly host. Not only for instances like this (which I understand don’t happen often at all), but to support smaller hosting companies who understand the importance of blog up-time. A Small Orange responds quickly to my inquiries, is patient with explaining all of the confusing back end blog information that I don’t understand and more than anything, they are kind and respectful. If you’re turning your blog into a career, a blogger-friendly hosting company is a non-negotiable.

For 99% of hosting companies, bandwidth is limited, even if they advertise that it’s unlimited. Be aware of that.

I’m using Google dfp for my ads. It has doubled my ad income, which makes a huge difference. I’m also a bit more tied to my analytics, which I’m embarrassed to admit. Maybe once my traffic returns to normal, I’ll break away from checking and documenting my numbers so much.

My popular posts now have a place on my sidebar, for easy access from any page within my blog.

Adding a line at the top of my posts with a link for my email subscription. I’ve seen a 200% increase in my subscribers since doing that for all of my popular posts.

Bottom line: I followed my own rules for making a post go viral, and after several smaller *viral* posts, I hit it big. I’m reluctant to take credit for it, as it’s not something that can be replicated. I do, however, know that through creating pinnable images, using SEO, creating web-friendly content that was relevant to current trends and being a step ahead of most tech blogs, I did play a part in the success of this post.

After all was said and done, I made a few dollars. I lost a lot of time. And my pageviews have increased substantially (even after taking the viral post out of the mix).

And I’m pretty excited about that. 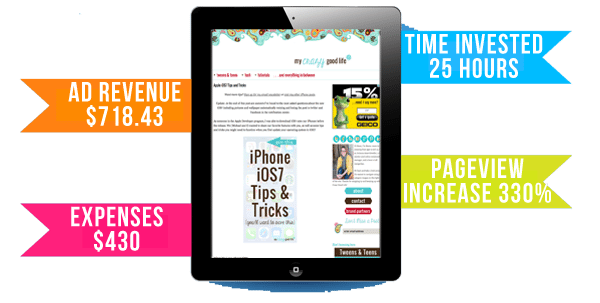 My viral post still receives between 200-600 hits a day. Still a lot of Pinterest traffic, but a lot of search traffic as well. I have been able to reduce my hosting plan to a $50/month one, but my overall traffic still isn’t anywhere near what it was last year at this time. I credit the viral post and a lot of linking out to other posts for the subscribers and readers I’ve gained.