Press day at Disney Animation Studio was nothing short of amazing. Seeing all of the behind-the-scenes work that’s put into an animated movie is mind-blowing! From animations to voiceover recordings in the sound booth (you’ll see more of that later this week), there is so much work put into each scene. 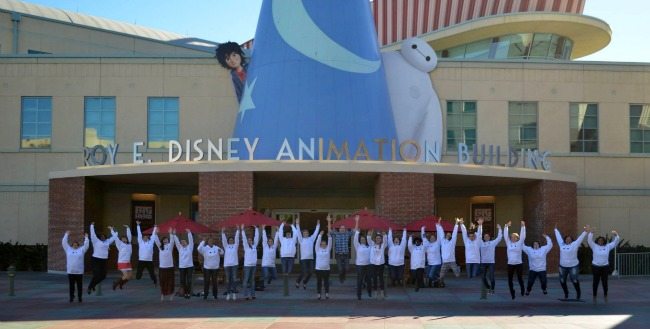 Walking in to the Animation Building, you can quickly see that the space has been redecorated to celebrate their latest film, Big Hero 6. 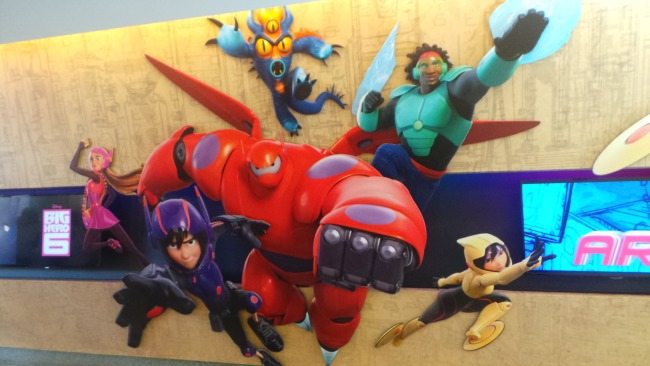 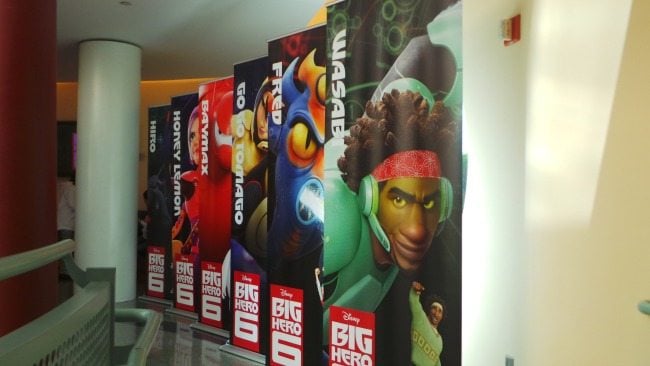 There are even drawings on the walls done by the different illustrators who worked on the movie. 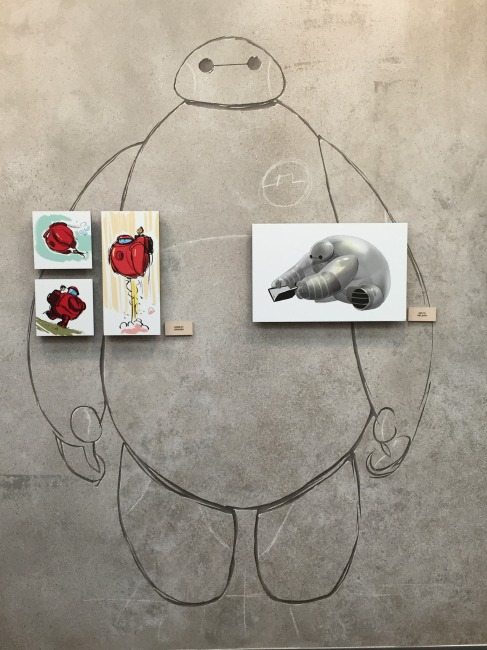 And of course, one wall is covered by “the” scene–the one that really solidifies the relationship between Baymax and Hiro–when they’re sitting on the wind turbine. Filmmaker Don Hall mentioned that this scene was a late addition to the movie, but one that was so important in showing how much the two loved each other. 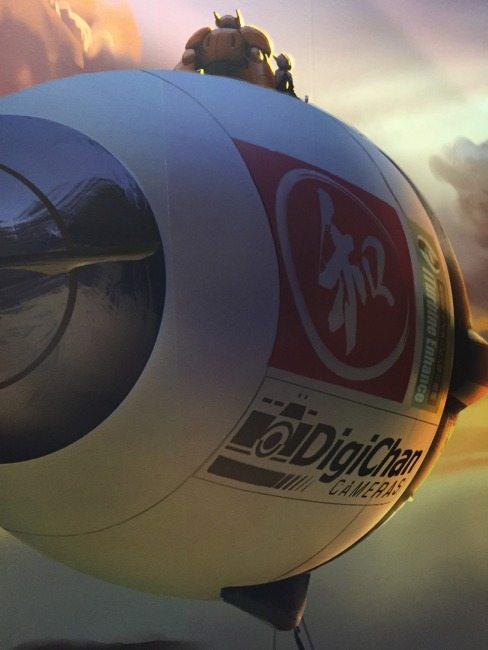 Even the common area in the Studio, the Caffeine Patch, has been transformed to look like a Japanese street–with a Japanese newspaper stand, a vending machine like the ones seen all over the streets of Japan, and even a coffee bar that looks like a sushi stand. 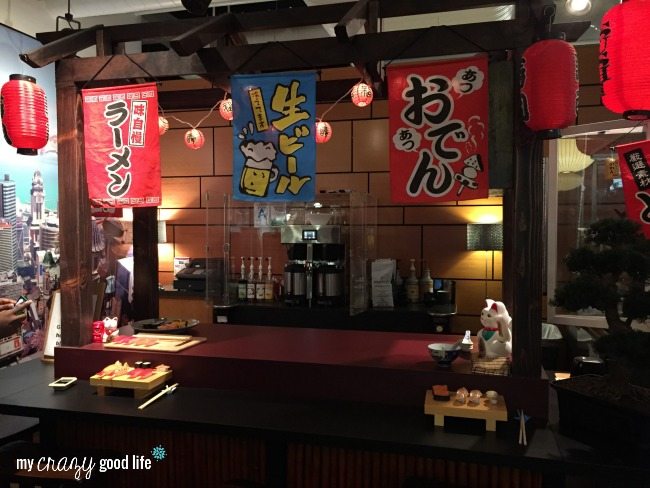 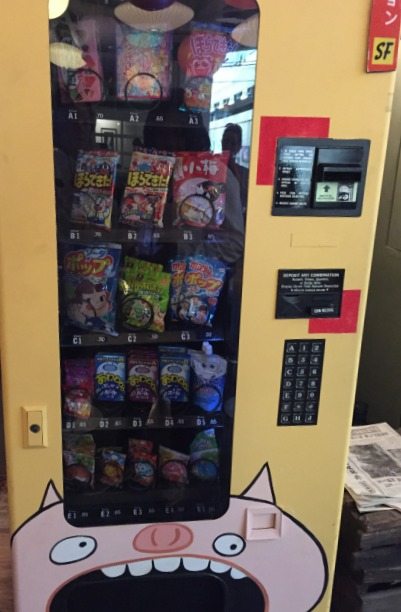 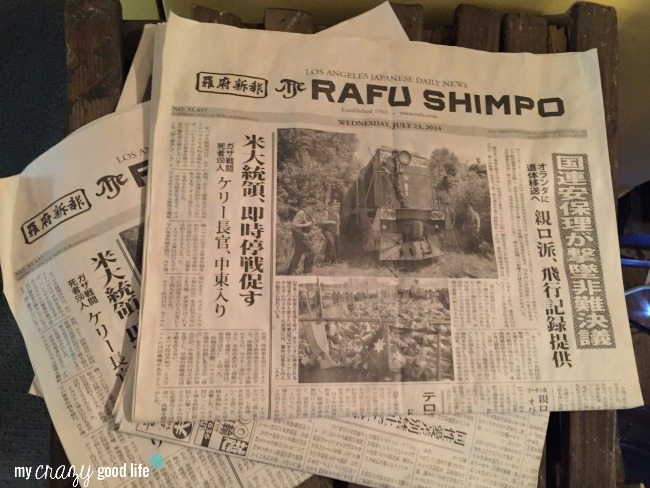 During our day at Disney Animation Studio, we were able to interview filmmakers Don Hall and Chris Williams.

First of all, I want to mention that being in the room with these guys was so fun. The positive energy and the fact that they are so down to earth was awesome. 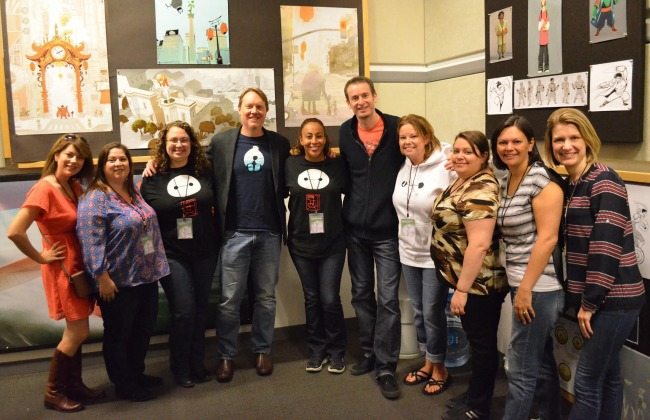 We were able to ask them a few questions about their experience with Big Hero 6, and I’ve put the questions and answers together for you in a quick and easy to read format:

Q. What attracted you to the story of Big Hero 6, being that it’s sort of a small-publishing in the comic book world?

A. Don: They were fun and appealing characters. They had goofy names, like Honey Lemon. You could tell that the creators loved Japanese pop culture, and that’s why they did the book. They wanted to take their love of anime, and all things Japanese, and infuse that with a Marvel superhero story. I love that. And most of all, there was an emotional story about a 14-year old super genius who loses his big brother, and his robot that becomes a surrogate big brother and heals him. It had all of these elements, but even then it was a dark horse that it would get picked by John [Lassiter]. There were some other stories that were a little bit more popular but he gravitated towards this one, as did the other directors when I pitched it to them. I think it was that emotional hook that got everybody.

Q. The scenery is really exciting, mesmerizing, and there is so much to see in it. How did you go about researching what the actual backgrounds would be and how much attention you wanted to draw to it?

A. Chris: We put a stake in the ground very early on saying we’re going to push the lighting. When the characters went on screen, it looked like a movie. It has a very cinematic look, and that was by design. We really wanted to push that with this movie. We had some rules that governed our art direction, which were simple characters on a complex background. There is more detail in this movie than in the last three movies. That’s a credit to our production designer, Paul Felix, and our art director of environment, Scott Watanabe.

Even the placement of the sun in the sky–the sun will always be in the right place in the sky, depending on the time of day in the scene. Depending on the geography of San Francisco, and even the moisture in the air. 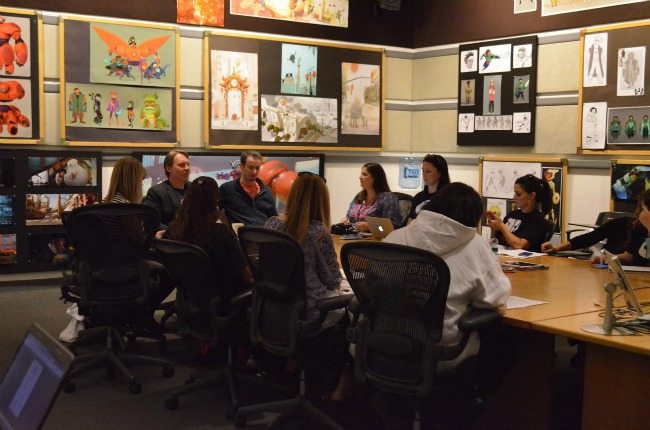 One big thing that I took away from the interview was that you have to be flexible. Scenes can be deleted and added and changed up until the very end based on what is best for the story, so you have to be willing to let go some of your favorites for the good of the story.

During our day at Disney Animation Studio, we were able to attend a drawing demonstration with one of the Disney Animators, Jin Kim. While I won’t be getting any phone calls from Disney about my stellar animation skills, it was a lot of fun to do! Here’s a quick summary of my rendition of Baymax:

After Mr. Kim drew Baymax with us, he was kind enough to draw Hiro as well. I grabbed this video of the demonstration and a short QA session for you:

If you have a future animator on your hands (or maybe you’re one yourself!), you’ll want to check out this fun Learn To Draw… Big Hero 6 YouTube series from Jin Kim.

This behind-the-scenes tour was a bucket list item that I didn’t know was on my bucket list–I’m happy to answer any questions you may have about it!

I attended press events with Disney and ABC TV, which included the Big Hero 6 press day at Disney Animation Studio. I was provided with an expenses paid trip to Los Angeles in exchange for my coverage about the events. No other compensation is given. Of course, opinions and experiences are my own.

Southwest Egg Roll in a Bowl {with Chipotle Ranch Dressing}

How to Make Coconut Whipped Cream