Meatza–silly word, serious yum. A meatza is a meat crust pizza. The crust of this BBQ Chicken Pizza, or meatza, is made from ground chicken and spices. It’s a low carb and keto pizza because it contains 4 net carbs per serving.

This low carb pizza is a delicious way to end the day when you want to be full and satisfied but stay away from the carbs–for any reason.

Whether you’re on a keto diet, Weight Watchers, are gluten free, on the 21 Day Fix, or just watching your carbs. Instead of pizza sauce or tomato sauce, BBQ chicken pizza uses BBQ sauce. There are so many store bought options, but I always prefer to make my own healthy and low carb BBQ sauce.

We love eating this low carb pizza on days when we want to reduce the carbs but not be hungry after a meal. We make sure to load up on veggies (because who are we kidding? this is a lot of meat.) both on top of the meatza and on the side.

Ingredients in this meatza recipe:

How to make meatza:

2. Make your crust by combining chicken, egg, and spices into a bowl and combining them well.

3. Place the meat mixture onto a greased baking sheet or one covered with a silpat mat. This is a recipe that loves to stick to the pan because of the low amount of fat in the meat.

4. Press the mixture flat and as even as possible. You can make your meatza round, square, or rectangle! If it’s easier for you, you can use a rolling pin to make your crust.

5. Place this low carb pizza crust into the oven and bake it for 15-20 minutes. Keep an eye on it so it doesn’t overcook, and make sure it’s cooked through before you pull it out. You’re looking for a golden brown crust.

7. Place your meatza in the oven and broil for 3-5 minutes, keeping a close eye on it for burning.

What kind of BBQ Sauce should I use?

Of course, I’m partial to this homemade low carb BBQ sauce. It’s naturally sweetened, contains no added sugars, and is low carb. The coffee in it brings the perfect depth of flavor, and the peppers spice it up perfectly.

I love making a big batch of it (like in the video) and storing it in mason jars. It’s an easy recipe that my kids often help me make, and I’ve gifted it several times to friends and family.

If you’re more of a store bought BBQ sauce type, I’d look for one with low sugar and no added sugar or artificial sweeteners.

Why is this a keto crust pizza?

When on a keto diet, many people like to use fathead dough or fathead pizza crust which is made from cream cheese, mozzarella, almond or coconut flour, and eggs. I prefer to use either whole grain pizza dough, meat crust, or vegetable crust pizzas.

This meat crust pizza is low in net carbs–just 4 grams. You can calculate the net carbs by taking the carbohydrate count and subtracting the grams of fiber.

This is considered a keto crust pizza because it has only 4 net carbs per serving. For those wanting to stick with low carb counts during the day, this is a filling meal that is low in carbs!

What toppings go on Meatzas?

Anything! There are so many varieties and pizza recipes–I have a meatza recipe that uses ground meat and sausage topped with veggies. You could add extra meat to your meatza, too! It’s all about what you like and what your nutritional goals are.

Breakfast meatza is a delicious way to make meatza! Topped with eggs, bacon, and veggies or even turkey chorizo and peppers!

Here are a few ways we have eaten meatza:

Assuming that you’re getting enough vegetables in, and that your other daily meals aren’t too meat heavy, meatza can definitely be a healthy meal!
It’s all about how you make it. Use turkey sausage instead of pork, use lean ground meats instead of ones with a lot of fat.

If you’re looking to make this a healthy meatza, load up on vegetable toppings and serve your meatza with a delicious side salad.

What sides go with meatza?

Salads! Since this is such a meat-heavy recipe, I highly recommend that you pair this with some raw veggies or a big salad–lots of veggies! Here are some of my favorites:

Each serving has 1 1/8 Red Container, 1/8 Green Container, 1/3 Blue Container, and a negligible amount of sweetener teaspoons for the homemade BBQ sauce.

This is a THM-S recipe. Make sure you use this BBQ sauce! 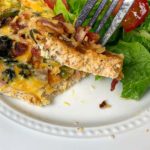 Nutrition is calculated using homemade BBQ sauce in the ingredient list. If you’re using other BBQ sauce, you should recalculate your nutrition information.