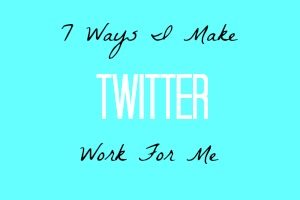 Some might say the word “addicted” is in order, but I don’t think so.

Going to the store

I think those people are addicted.

Stuff that wouldn’t fill a whole blog post, but needs to be shared.

I have had a few friends join lately and the first questions they ask are “Who do I follow? How do I find people? How do I “do” Twitter?”

Because that’s how many I can think of, and I am not about adding fillers tonight.

Oh, and Julie? I’m sorry for not giving you a nice round number.

Follow them all at first, then decide who tweets the most useful information.

I found one in Tucson that is great about news updates.

Not news updates like “SWAT situation in Tucson today” but “Avoid 5th Street and Craycroft due to police activity,” or “I-10 closed eastbound at milepost 175.”

That’s exactly what I want to know about when I am looking through my Twitter stream while checking out at the grocery store. It has saved me quite a few traffic delays.

This is different from following the news network. It’s definitely more personal, but depending on the news you want it might be your best bet.

My gateway Twitter newscaster was @JeffBeamish, a local Meteorologist who kept me up to date through the completely weird tornado/flood warning a few months ago. He’s also an avid sports fan and gives updates on games that he’s watching.

Watching the news is one thing, but reading tweets about what the weatherman is seeing every 5 minutes?

I have found several local people to follow by looking through the local newscaster’s following/follower lists. Local businesses that I didn’t realize were on Twitter, certain government officials, and some local PR people are just a few examples of who I’ve found.

When you can, retweet instead of reply

When you hear something interesting, do you nod you head and say, “Wow” to the person who told you, or do you say “Wow” and then go tell a friend?

Retweeting is a way for you to say “I thought this was interesting… check it out.” And even better? If I see something hilarious, or witty, or interesting being retweeted by a friend, I’m likely to go follow the original person who tweeted it in the first place.

Another great reason to use Twitter? It’s like having a roomful of friends waiting to give you their opinion.

That happened to my daughter last month. Put it in milk and get to a dentist.

I’m a dental assistant. Have your son rinse with milk, put the tooth in a ziplock bag full of milk, and get to an emergency dentist.

This did not happen to me (though it’s a definite possibility), but I have seen similar twitter stories.

The hash tag (#) is a search tool for Twitter. You can click on it and see what the millions of Twitter users are saying about a subject.

Examples of subjects? There are thousands. Millions, even.

Someone funny that you want to tell your friends about, or someone new that needs a few followers?

Every Friday, people on Twitter refer their friends to others by tweeting their name and #ff or #followfriday after it.

Common courtesy is to either reply and thank the person or retweet the #ff so your followers can see it, too!