Yes, Sign Me Up!
Home » Family » Text Signatures: The Tween Thing To Do
0 shares

You may remember that Michael got a cell phone for Christmas 2010.

After all of the stress I had over the decision, I’m glad that we decided to get him one. I feel better about letting him go places (like the park) without me and we get to interact in a different way, which is fun.

The one thing I don’t understand about kids and phones are the need to use text signatures.

It probably has something to do with my age. I just don’t understand why, if you’re limited to 160 characters, you would make 15 of them something that doesn’t get your message across.

Either way, I do like seeing Michael’s signatures change. Most of the time they’re funny, and show a little of his personality.

Every once in a while, I make him take one down.

But they always bring a smile to my face because they show that he is confident in what he likes, and that is something new around here.

*BACON* was one of the first signatures. Michael loves bacon, but I’m still confused about why he wanted all of his friends to know that.

Steve and I started calling him bacon around that time, which drove him crazy. It’s ok, though, because we laughed. 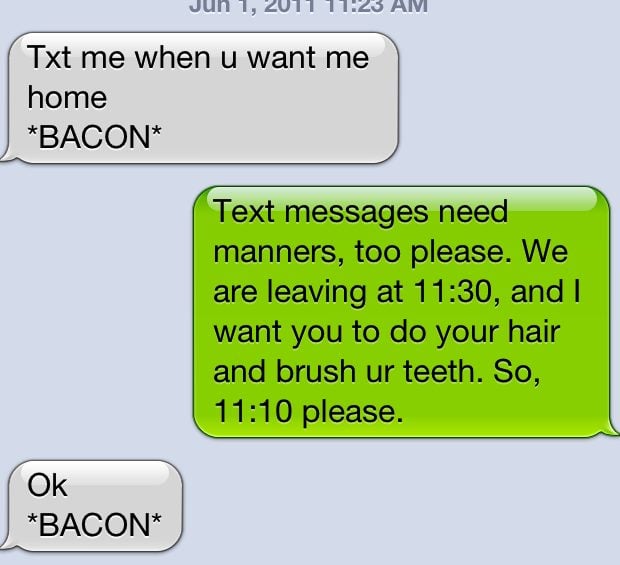 *V.I.P ACCESS* {without proper punctuation – that drove me crazy} was up next. I’m not quite sure what VIP access he was talking about, but I kept an extra eye on him that week – just to be sure he wasn’t sneaking out to any VIP events.

*$!<K* – It took me a while to figure this one out. I should mention that spelling isn’t something I worry about in text messages. Well, to be honest, I started to critique his spelling in text messages and he wouldn’t text me for a while, so I stopped. I guess it’s ok to have a spellcheck-free zone. Now that I look at it, my spelling isn’t the best in these texts. I’m blaming that on the autocorrect, which could fill up another post altogether. 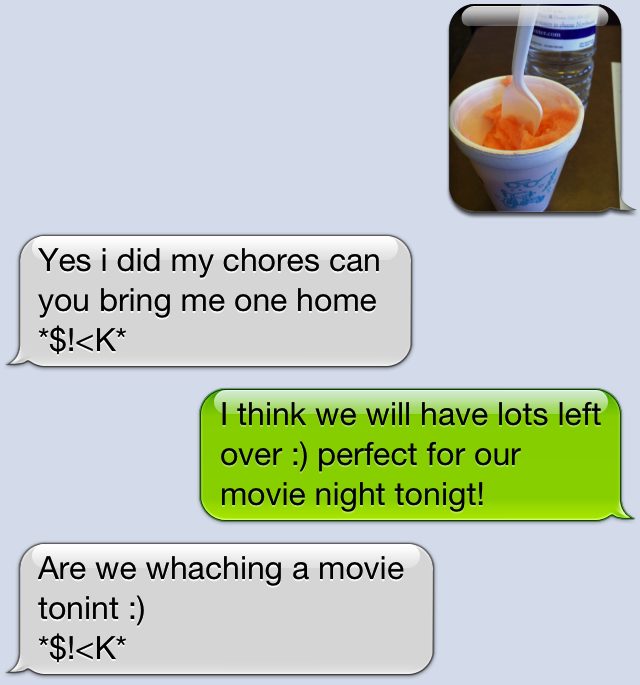 This cracks me up because Michael has had a fb account for a few years, and rarely uses it. I guess this day was one of the days he liked it? I remember getting this text message at BlogHer and I still laugh about it. 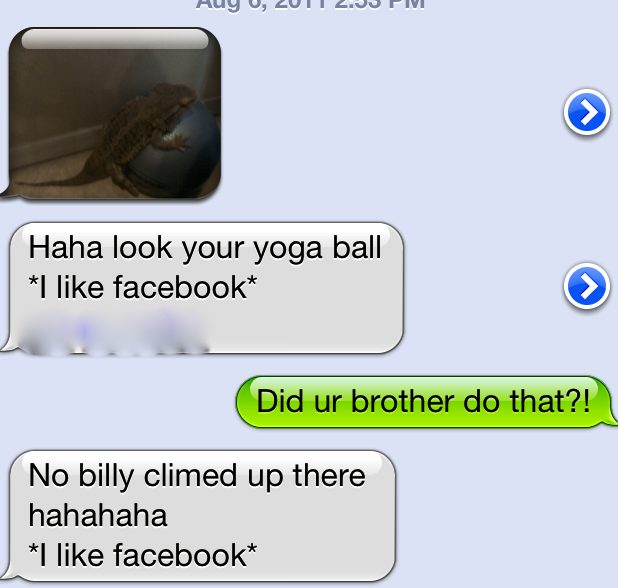 This is one of the signatures that I shut down. There haven’t been many… I’m curious about what he thinks you do at a “partay.” 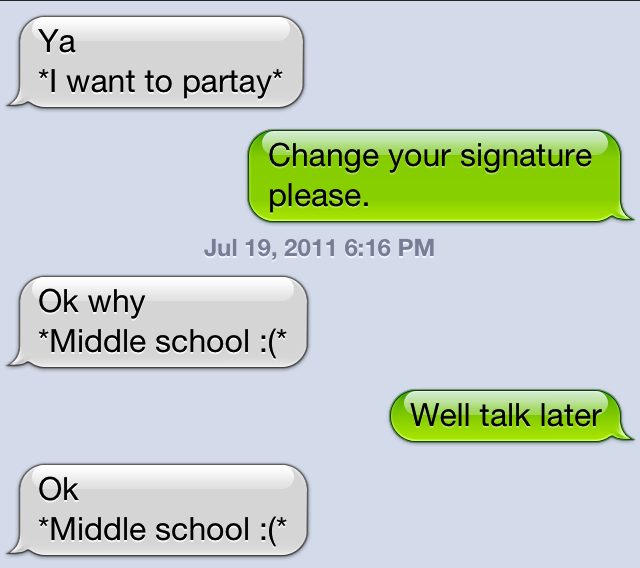 I remember laughing at this one, as well. This must have been one of the times Steve shared his old school rap music with him. Because Steve?

From the West Coast. 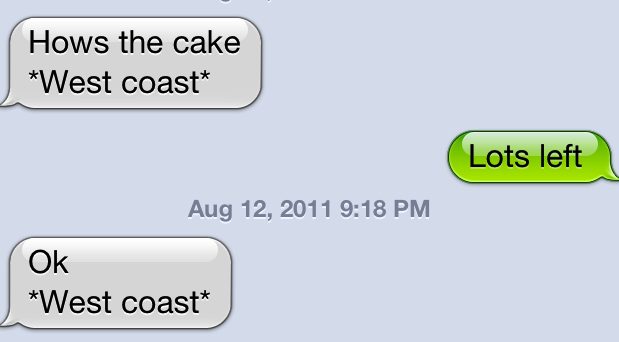 Michael left a mint on Steve’s pillow before he went to a sleepover – that’s the back story. In the end though, I won because of his signature. 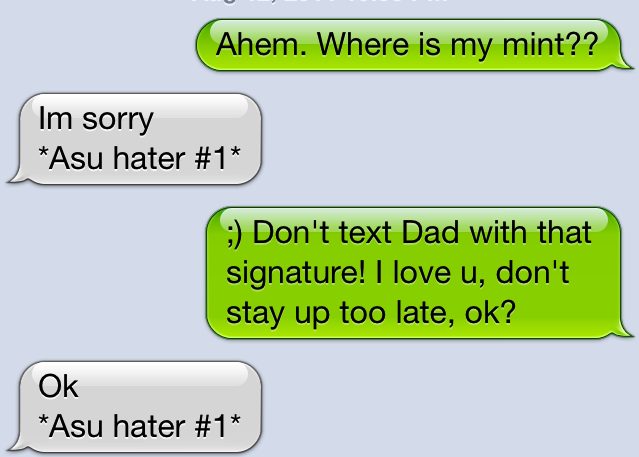 Every once in a while, we’ll stick our own signatures in our texts to him. We laugh because we’re picking on him, and he laughs because he thinks we’re dorky. 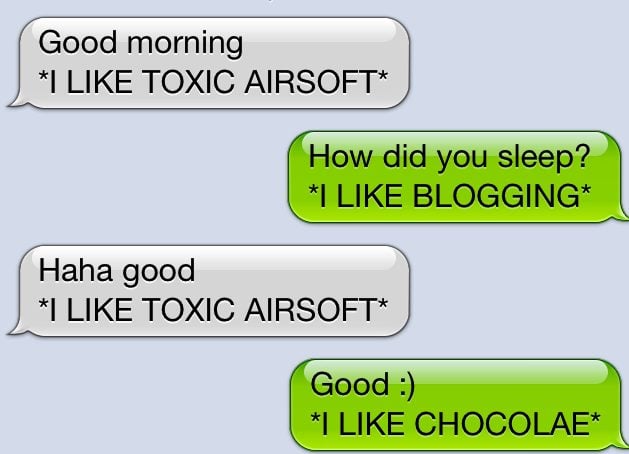 If your kid is anything like mine, they are obsessed with things they can’t have – like energy drinks. Michael loves his Monster sweatshirt, has Red Bull stickers all over his binders, and asks for Rockstars at least once a week.

Does he really think that all of a sudden, I’ll just say yes?

I think he just likes getting me annoyed.

Again with the spelling. Though, I really like this part of him having a cell phone. I can keep tabs on him and his brother at home (read: I can make sure they’re not killing one another) if I have a meeting at work. 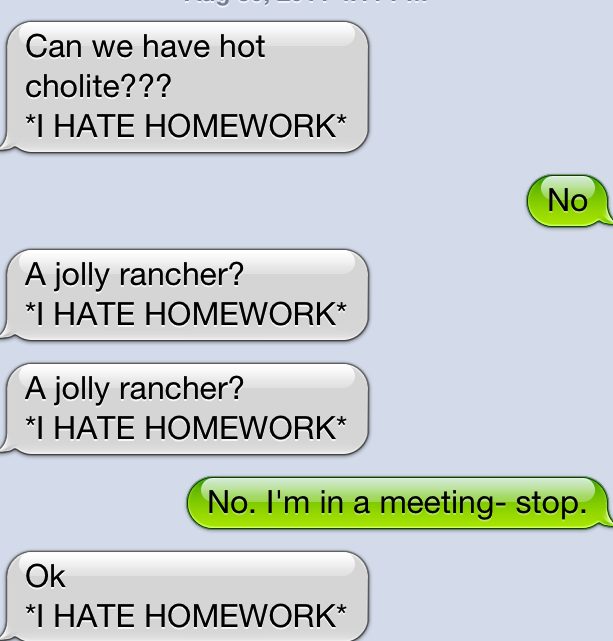 I’m really bummed because I couldn’t find a picture of his *Cheerleaders* signature he put up after the game I took him and his friends to a UA game around Christmas.

Like I said, I’m glad we ended up getting him the phone. It gives us peace of mind… and makes us laugh a whole lot.

I’m dying to hear about other signatures… Do your kids have them?