Yes, Sign Me Up!
Home » Health & Fitness » Running Tips From A Non-Runner
3 shares

Before I begin, let’s get something straight.

I am not a runner.

I run short distances (1-2 miles) several times a week, and I have to push myself through it.

I have been a non-runner for about two years now.

I like the way I feel after a short run. I like that I can get outside, enjoy the scenery (while looking for snakes), and get a quick workout in. But as I said before, I have to push myself through every single step.

I have a friend who is thinking of taking up running, and thought that since I am such a skilled non-runner, maybe I could share some tips. 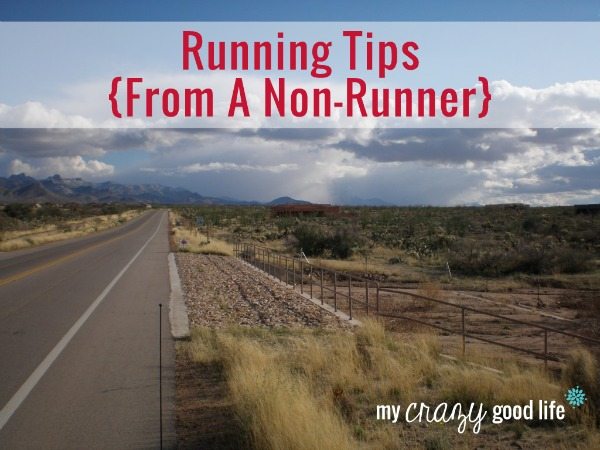 My actual run – looking at this at 10pm, I’m kicking myself for not running every day.

1. Buy good shoes. Notice I didn’t say “super crazy expensive shoes.” You should buy those after you decide that you like running. Or, in my case, decide that even though you dislike running, you’re going to keep running.

2. Get some music. Or a friend. I become very, very bored when I run, so I need something (or someone) to distract me. For a while, my friend Tracie and I would meet up at 5 a.m. and gossip for an hour while we ran. Now that it’s dark and freezing at 5 a.m., I run after I drop the boys off at school. Alone. With music. Always with music. I change my playlists often, but one constant is that my fourth song in is a “power song.”

3. Run the same route. Every time you run (at least at first), run the same route. It’s a mind game, but it works. Take note of where you get tired. Where do you have to stop and walk? For Tracie and I, first we would make it to the cattle guard. Then, the next week, to the yellow sign. The third week? The white sign. Every week we ran, we would push ourselves a little further. Eventually we were saying, “Do you remember when we could only make it to the yellow sign? Pssssht… that was so long ago…”

4. Talk to yourself. When you want to walk, ask yourself why. Are your legs tired? Are you bored? Is it uncomfortable to breathe? If you’re not going to fall over, push yourself a little more. Usually when I want to stop, I’m really just bored. But then I remind myself that running is faster than walking and I’ll get home quicker.

6. Take note of your body. When I run I tend to clench my jaw and shrug and tighten my shoulders. Running isn’t a leg-only sport. You’ll figure that out the day after your first run. My arms, back, sides, and legs are usually sore after I take a break from running and then start again. Listen to your body, and make sure you aren’t being too hard on yourself.

7. Pick your power song. My current power song is ‘Till I Collapse by Eminem. It has been my power song for a while because it’s the perfect tempo and the lyrics are perfect. And I may or may not have a crush on Eminem. It’s usually #4 on my playlist (when I notice I start getting tired), and comes with the following rules:

a. You can’t stop running during the power song.

That’s it. That’s my only rule. I honestly have told myself that if I really want to stop during the power song, I have to fall down. And I’m not that dramatic of a person to be falling down while running on the side of the road.

Running is a great form of exercise, in my humble opinion. It raises your heart rate, works many muscle groups, and it gets you out of the house. I obviously have a love/hate relationship with running, but want to know your thoughts…