These roasted artichokes are pressure cooked with lots of garlic and seasoned with lemon and tamari, then roasted to crispy, tender perfection. A perfect vegetable side dish recipe that your family will love. Make two easy dipping sauces with the extra marinade!

Whether you’re making these artichokes in the Foodi, an Instant Pot, or right on the grill, they’ll be a family favorite soon! I love Ninja Foodi artichokes because you can cook them and then roast them using the same appliance.

If you’ve seen artichokes in your grocery store and not known what the heck to do with that strange looking vegetable, I’ve got a few ideas here for you.

Roasted artichokes are one of my family’s favorite recipes, and we make them often in the summer. They’re easy to grill or cook in the pressure cooker, and the seasonings you can use are endless!

There are three steps to making these air fryer artichokes:

How to prepare and steam artichokes:

How to bake/brown artichokes (an optional step):

If you’re using an oven, preheat the oven to 350º and cook the artichokes in a shallow baking dish for 10-15 minutes, watching for them to brown.

How to make grilled artichokes

If you’re making these artichokes on the grill, set it to medium high or 350º and allow them to cook both cut side up (first) and then cut side down for 5-10 minutes.

How to eat a roasted artichoke:

The entire artichoke is not edible–this is an important fact.

You’re going to pull an artichoke leaf off and scrape your teeth against the “meat” on the underside of the leaf. The artichoke leaves aren’t edible–just the meat underneath is.

When you’ve pulled all of the leaves off, you’re left with the stem and the artichoke heart, which are both edible.

How to make an easy dipping sauce for your artichokes:

Take 4 teaspoons of melted butter or mayo and add 1 teaspoon of the marinade. Mix well.

If you’re watching your waistline, I’d recommend using vegetable broth in your marinade instead of olive oil.

21 Day Fix/Ultimate Portion Fix: 1/2 artichoke counts as approximately 1 green container. The marinade is free except for the oil, and you can easily substitute that for vegetable broth!

A quick note that tamari, like all soy sauce, is pretty high in sodium. Just be mindful of that when marinating these delicious artichokes.

Trim Healthy Mama: This is a THM-S recipe. Keep your serving size to one medium or 1/2 large artichoke. 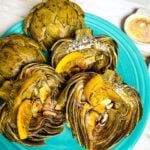 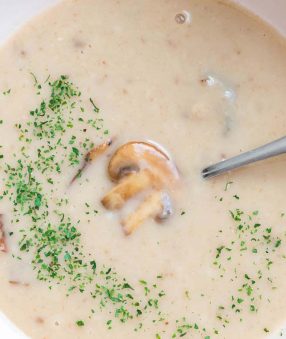 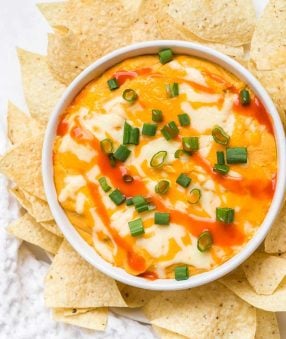