Yes, Sign Me Up!
Home » Lifestyle » Tweens & Teens » Energy Drinks and Teens: Which Drinks Are The Worst?
4 shares

Michael is 14. He’s in the middle of learning who he is what he likes.

He thinks his parents are totally uncool.

Actually, most things are totally uncool when you’re 14.

Most things except video games, skateboarding, smartphones, and energy drinks.

Our philosophy is everything in moderation, and that carries over to our parenting philosophy too–we let the boys have soda & sweets, but not too much.

I resisted against energy drinks for a long time, and then I realized that it’s just a matter of time before he goes to a friend’s house and drinks three of them because he’s never had one before. Before allowing Michael to drink any energy drink, I did some research about the ingredients I didn’t like. I like to be informed, and thought you’d appreciate it as well–here’s a look at all of the top energy drinks, and the ingredients that worry me the most: caffeine, sugar, and taurine.

For reference, a 16 ounce can of coke (the same size as most energy drinks) contains:

Taurine: not listed, but regular Rehab has 2,000mg taurine

While a little extra sugar and caffeine won’t normally cause an issue, some of these drinks have more than 4 times the caffeine in a 16 ounce Coke. The sugar isn’t too much to worry about in my eyes, with most energy drinks having less than or about the same sugar content as a Coke. And the taurine? That’s a tricky one.

Taurine is an amino acid. It’s naturally found in the human body, almost all meats, and even breast milk. The problem I have with taurine is that not much is known about the long-term use of the amino acid. As you can see above, some energy drinks have 2,000mg of taurine in them.

Our teens are still growing. They’re teens, but they’re kids. What if in 10 years doctors come out and say, ‘Whoa! All that taurine in those energy drinks you’ve been drinking for 20 years is causing high rates of {insert whatever scary illness you want}.” We just don’t know.

So, let’s look at the facts. The energy drinks that I’d rather allow my teen to have are Starbucks Refreshers, AMP Energy, Mountain Dew Kickstart, or Red Bull. The smaller size of the Red Bull gets it on this list–if it were a 16 ounce can it would be left off for sure.

Please remember that I’m comparing these drinks to other energy drinks, so of course they still have high amounts of caffeine, sugar, and even taurine in them. But compared to other energy drinks (like the ones I listed ingredients for above), I think these are the least harmful. And I understand that we’re not even touching on high fructose corn syrup, artificial coloring, or GMOs. I know those things are also cause for alarm. Right now, though, I’m concentrating on sugar, caffeine, and taurine. 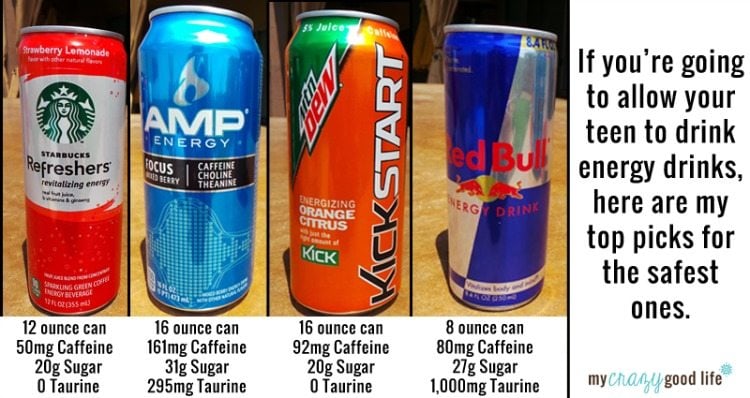 And of course, I have to name the ones I’d rather not allow my teen to drink: Full Throttle, Knockout, and NOS. 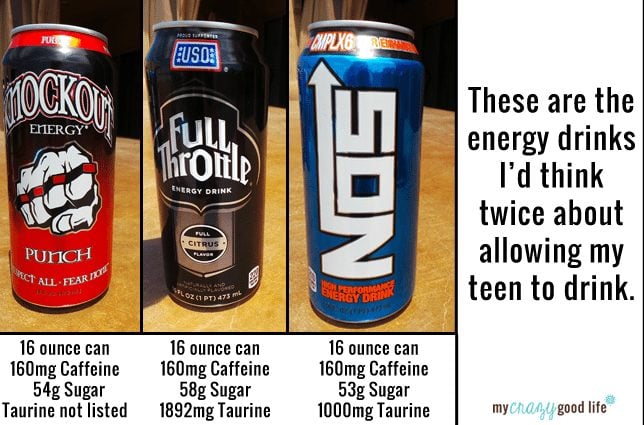 Does this mean I’ll never allow Michael to have one of the drinks off this list? No, but I’ll be thinking twice before doing it. They have higher levels of caffeine, sugar, and taurine so I’d maybe allow him to have one on a day that he didn’t have any other caffeine or sugar.

I don’t allow Michael to have energy drinks every day, or even every week. Everything in moderation, remember?

Note: There are several varieties of each energy drink available on the market, and not all flavors have the same ingredients. This information is meant to be a quick look at the most popular energy drinks.

When possible, I obtained these numbers from the product itself or the manufacturer’s website. I also used internet search engines to find the amounts of caffeine, sugar, and taurine when not listed by manufacturer. In that case, the numbers were listed by 2 reputable sources before being listed here. All cans are 16 ounces unless mentioned otherwise.